K-nearest neighbors (KNN) algorithm uses ‘feature similarity’ to predict the values of new datapoints which further means that the new data point will be assigned a value based on how closely it matches the points in the training set. We can understand its working with the help of following steps −

Suppose we have a dataset which can be plotted as follows − 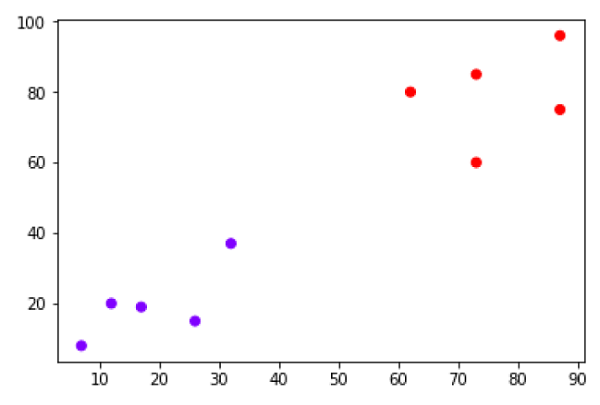 Now, we need to classify new data point with black dot (at point 60,60) into blue or red class. We are assuming K = 3 i.e. it would find three nearest data points. It is shown in the next diagram − 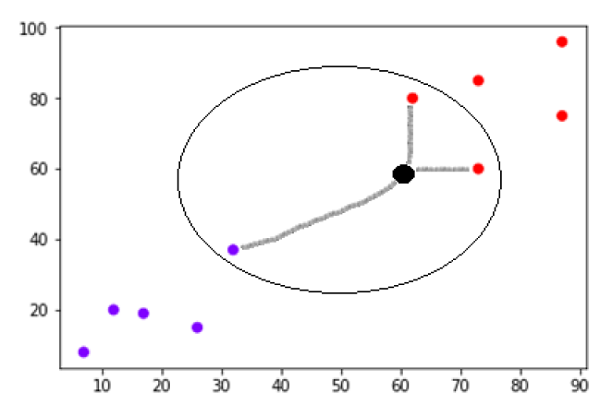 We can see in the above diagram the three nearest neighbors of the data point with black dot. Among those three, two of them lies in Red class hence the black dot will also be assigned in red class.

Next, we will divide the data into train and test split. Following code will split the dataset into 60% training data and 40% of testing data −

Next, data scaling will be done as follows −

Next, train the model with the help of KNeighborsClassifier class of sklearn as follows −

Next, print the results as follows −

Next, import KNeighborsRegressor from sklearn to fit the model −

At last, we can find the MSE as follows −

Pros and Cons of KNN

KNN can be used in banking system to predict weather an individual is fit for loan approval? Does that individual have the characteristics similar to the defaulters one?

KNN algorithms can be used to find an individual’s credit rating by comparing with the persons having similar traits.

Other areas in which KNN algorithm can be used are Speech Recognition, Handwriting Detection, Image Recognition and Video Recognition.