In general, Decision tree analysis is a predictive modelling tool that can be applied across many areas. Decision trees can be constructed by an algorithmic approach that can split the dataset in different ways based on different conditions. Decisions tress are the most powerful algorithms that falls under the category of supervised algorithms.

They can be used for both classification and regression tasks. The two main entities of a tree are decision nodes, where the data is split and leaves, where we got outcome. The example of a binary tree for predicting whether a person is fit or unfit providing various information like age, eating habits and exercise habits, is given below − 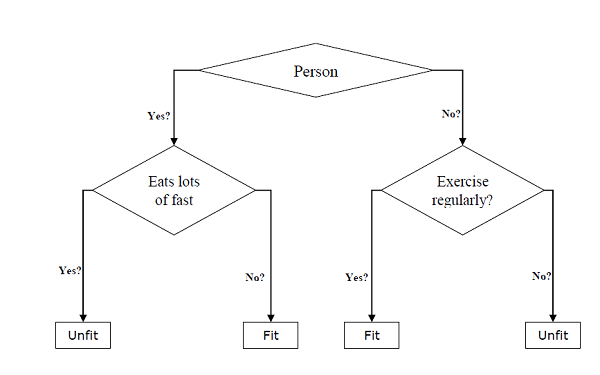 In the above decision tree, the question are decision nodes and final outcomes are leaves. We have the following two types of decision trees −

It is the name of the cost function that is used to evaluate the binary splits in the dataset and works with the categorial target variable “Success” or “Failure”.

Higher the value of Gini index, higher the homogeneity. A perfect Gini index value is 0 and worst is 0.5 (for 2 class problem). Gini index for a split can be calculated with the help of following steps −

A split is basically including an attribute in the dataset and a value. We can create a split in dataset with the help of following three parts −

As we know that a tree has root node and terminal nodes. After creating the root node, we can build the tree by following two parts −

While creating terminal nodes of decision tree, one important point is to decide when to stop growing tree or creating further terminal nodes. It can be done by using two criteria namely maximum tree depth and minimum node records as follows −

Terminal node is used to make a final prediction.

As we understood about when to create terminal nodes, now we can start building our tree. Recursive splitting is a method to build the tree. In this method, once a node is created, we can create the child nodes (nodes added to an existing node) recursively on each group of data, generated by splitting the dataset, by calling the same function again and again.

After building a decision tree, we need to make a prediction about it. Basically, prediction involves navigating the decision tree with the specifically provided row of data.

We can make a prediction with the help of recursive function, as did above. The same prediction routine is called again with the left or the child right nodes.

In the following example, we are going to implement Decision Tree classifier on Pima Indian Diabetes −

Now, split the dataset into features and target variable as follows −

Next, we will divide the data into train and test split. The following code will split the dataset into 70% training data and 30% of testing data −

Next, train the model with the help of DecisionTreeClassifier class of sklearn as follows −

Next, we can get the accuracy score, confusion matrix and classification report as follows − 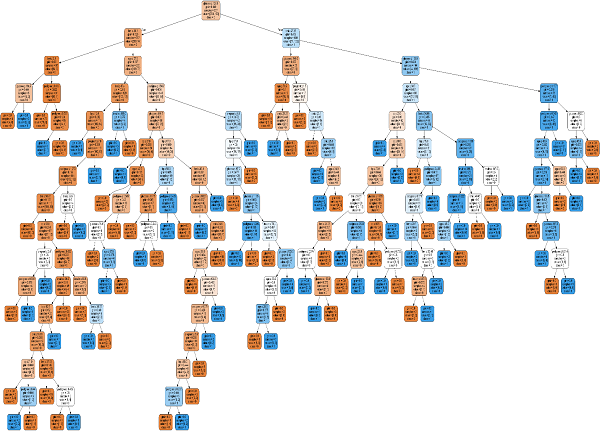