Getting current time from NTP Servers

In IoT devices, the timestamp becomes an important attribute of the packet exchanged between the device and the server. Therefore, it is necessary to have the correct time on your device at all times. One way is to use an RTC (Real Time Clock) interfaced with your ESP32. You can even use ESP32's internal RTC. Once given a reference time, it can correctly output future timestamps. But how will you get the reference time? One way is to hardcode the current time while programming the ESP32. But that is not a neat method. Secondly, the RTC is prone to drift and it is a good idea to keep providing it with reference timestamps regularly. In this chapter, we will see how to get the current time from NTP Servers, feed it to ESP32's internal RTC once, and print future timestamps.

A brief about NTP

NTP stands for Network Time Protocol. It is a protocol for clock synchronization between computer systems. In layperson terms, there is a server sitting somewhere which maintains time accurately. Whenever a client requests the current time from the NTP server, it sends back time accurate up to 100s of milliseconds. You can read more about NTP here. For ESP32, there is an in−built time library that handles all the communication with the NTP servers. Let's explore the use of that library in the code walkthrough below.

We will use an in−built example for this walkthrough. It can be found in File −> Examples −> ESP32 −> Time −> SimpleTime. It can also be found on GitHub.

We begin with the inclusion of the WiFi and the time libraries.

Next, we define some global variables. Replace the WiFi SSID and password with the corresponding values for your WiFi. Next, we have defined the URL for the NTP Server. The gmtOffset_sec refers to the offset in seconds of your timezone from the GMT or the closely related UTC. For instance, in India, where the timezone is 5 hours and 30 mins ahead of the UTC, the gmtOffset_sec will be (5+0.5)*3600 = 19800.

The daylightOffset_sec is relevant for countries that have daylight savings. It can simply be set to 0 in other countries.

Next, you can see a function printLocalTime(). It simply fetches the local time from the internal RTC and prints it to serial.

The struct tm is defined in the time.h file that we have included at the top. In fact, the time library is not an ESP32 specific library. It is an AVR library that is compatible to ESP32. You can find the source code at here. If you look at the time.h file, you will see the struct tm.

Now, the getLocalTime function is ESP32 specific. It is defined in the esp32−hal−time.c file. It is a part of the Arduino core for ESP32 and doesn't need a separate include in Arduino. You can see the source code here.

Now, the meaning of the formatters is given below −

Now, coming to the setup and the loop. In the setup, we initialize Serial, connect to the internet using our WiFi, and configure the internal RTC of ESP32 using the configTime() function. As you can see, that function takes in three arguments, the gmtOffset, the daylightOffset and the ntpServer. It will fetch the time from ntpServer in UTC, apply the gmtOffset and the daylightOffset locally, and return the output time. This function, like getLocalTime, is defined in the esp32-hal-time.c file. As you can see from the file, TCP/IP protocol is used for fetching time from the NTP server.

Once we've obtained the time from the NTP server and fed it to the internal RTC of the ESP32, we no longer need WiFi. Thus, We disconnect the WiFi and keep printing time in the loop every second. You can see on the serial monitor that the time gets incremented by one second in every print. This is because the internal RTC of ESP32 maintains the time once it got the reference. 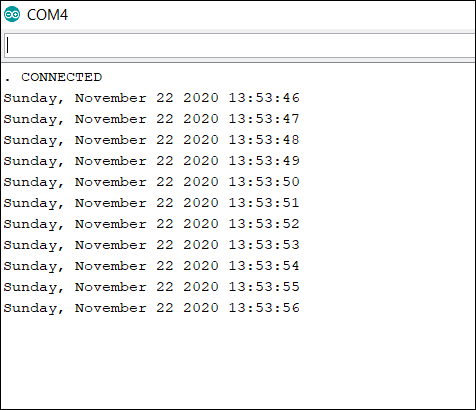 That's it. You've learned how to get the correct time from the NTP servers and configure your ESP32's internal RTC. Now, in whatever packets you send to the server, you can add the timestamp.