How does pipelining improve performance in computer architecture?

Latency defines the amount of time that the result of a specific instruction takes to become accessible in the pipeline for subsequent dependent instruction. Latency is given as multiples of the cycle time.

The latency of an instruction being executed in parallel is determined by the execute phase of the pipeline. It can illustrate this with the FP pipeline of the PowerPC 603 which is shown in the figure. 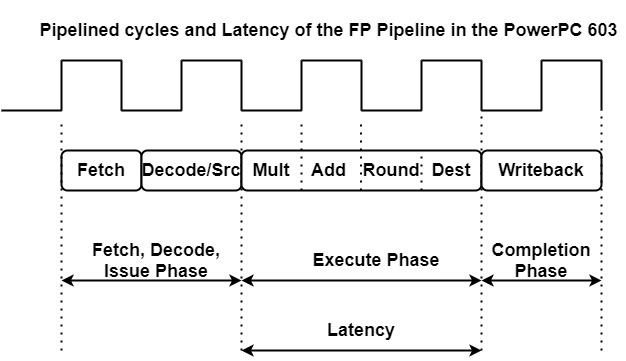 The Power PC 603 processes FP additions/subtraction or multiplication in three phases. Two cycles are needed for the instruction fetch, decode and issue phase. The subsequent execution phase takes three cycles. At the end of this phase, the result of the operation is forwarded (bypassed) to any requesting unit in the processor. Finally, in the completion phase, the result is written back into the architectural register file.