What is Parallel Decoding in Computer Architecture? 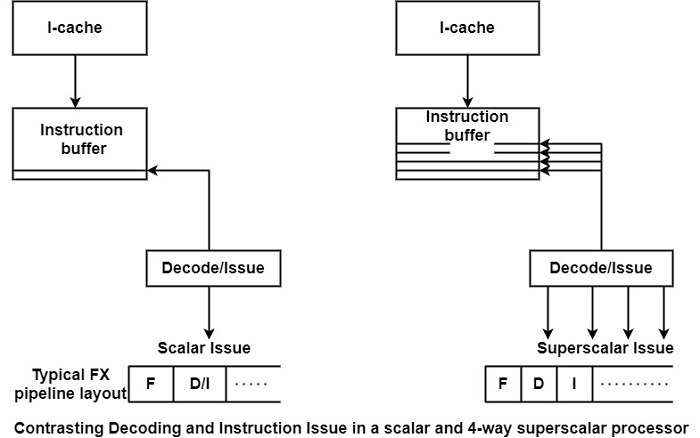 Since a superscalar processor has more EUs than a scalar one, the number of execution instructions is far higher than in the scalar case. This means that more comparisons have to be performed in the course of dependency checks. The decode-issue path of the superscalar processor is a much more critical issue in achieving a high clock frequency than that of scalar processors.

Superscalar processors tend to use two, even three, or more pipeline cycles for decoding and issuing instructions. For instance, the PowerPC 601, PowerPC 604, and UltraSparc need 2 cycles, while the α 21064 requires 3 cycles and the PentiumPro even needs 4.5 cycles. One way to cope with this problem is through pre-decoding.

Predecoding shifts a part of the decoding task up into the loading phase of the on-chip instruction cache (I-cache) as shown in the figure. 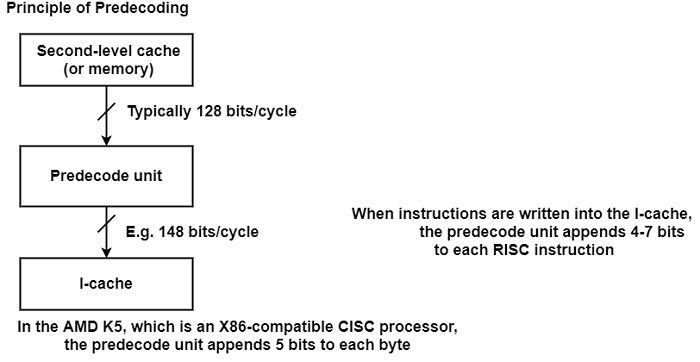 Here, while the I-cache is being loaded, a dedicated unit is called the predecoded unit. It executes partial decoding and joins several decode bits to each instruction. In the case of RISC processors, for example, 4-7 bits are usually attached which indicate −

The number of the pre-decoded unit are shown in the table.

For a CISC processor such as the AMD, K5 pre-decoding can determine where an instruction starts or ends, where the opcodes and prefixes are, and so on. This requires quite a large number of extra bits. The K5 adds five extra bits to each byte. Thus, in this case, more than 70% additional storage space is needed in the instruction cache.

Predecoding is used either to shorten the overall cycle time or to reduce the number of cycles needed for decoding and instruction issues. For instance, pre-decoding the PowerPC 620, R10000, and Hal’s PM1 require only a single cycle for decoding and issue.