What is multiple shared bus in computer architecture?

The limited bandwidth of the single shared bus represents a major limitation in building scalable multiprocessors. There are several ways to increase the bandwidth of the interconnection network. A natural idea is to multiply the number of buses, like the processors and memory units. Four different ways have been proposed for connecting buses to the processors, memory units and other buses are as follows −

The employment of the 1-of-N arbiters is not sufficient in such systems. Arbitration is a two-stage process in 1-dimension multiple bus systems. First, the 1-of-n arbiters (one per memory unit) can resolve the conflict when multiple processors need unshared access to a similar shared memory unit.

After the first stage m (out of n) processors can get access to one of the memory units. However, when the multiple buses (b) is less than the number of memory units (m), the second stage of arbitration is required where an additional b-of-m arbiter is employed to assign buses to those processors that strongly retrieved access to a memory unit. 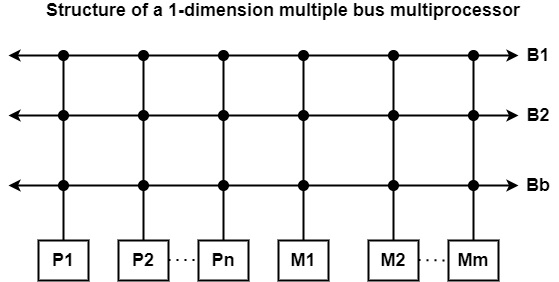 2 or 3 dimension bus systems − A further generalization of the 1-dimension multiple buses is the introduction of the second and third dimensions. In these systems, multiple buses compose a grid interconnection network. Each processor node is linked to a row bus and a column bus.

Processors along a row or column constitute a conventional single bus multiprocessor. The memory can be distributed in several ways. The most traditional approach is to attach memory units to each bus. The main problem of these architectures is the maintenance of cache coherency.