What is single shared bus in computer architecture?

One of the most famous interconnection networks is the single shared bus. Firstly, its organization is simply a generalization and extension of the buses employed in uniprocessors and some additional ones to solve the contention on the bus when several processors simultaneously want to use the shared bus. These lines are called arbitration lines and play a crucial role in the implementation of shared buses.

Obviously, as the number of processors on the bus increases, the probability of contention also increases proportionally, reaching a point when the whole bandwidth of the bus is exhausted by the processors, and hence, adding a new processor will not cause any potential speed-up in the multiprocessor. One of the main design issues in shared bus multiprocessors is the enhancement of the number of applicable processors by different methods.

There are the three most important techniques are as follows −

Without these improvements, the applicable number of processors is in the range of 3-5. By introducing private memory and coherent cache memory, the number of processors can be increased by an order of magnitude up to 30 processors. Bus hierarchies open the way to constructing scalable shared memory systems based on bus interconnection.

The typical structure of a single bus multiprocessor without coherent caches is shown in the figure. The new component of the system, relative to a uniprocessor, is the bus arbiter logic which has the role of allocating the bus in the case of several simultaneous bus requests, and the extra bus exchange lines supporting the work of the arbiter. 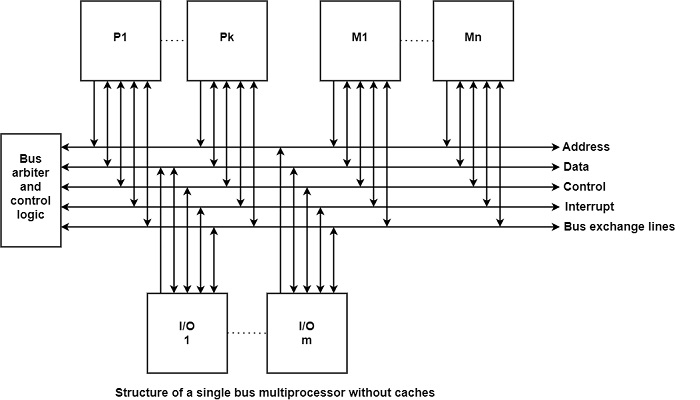 A memory write access need two phases that are as follows −

A memory read can access three phases are as follows −