What is Implementation of connection less services?

When connectionless service is offered, packets are frequently called Datagrams (just like telegrams) because individual packets are injected to the subnet and are routed individually.

The implementation of connectionless service is diagrammatically represented as follows − 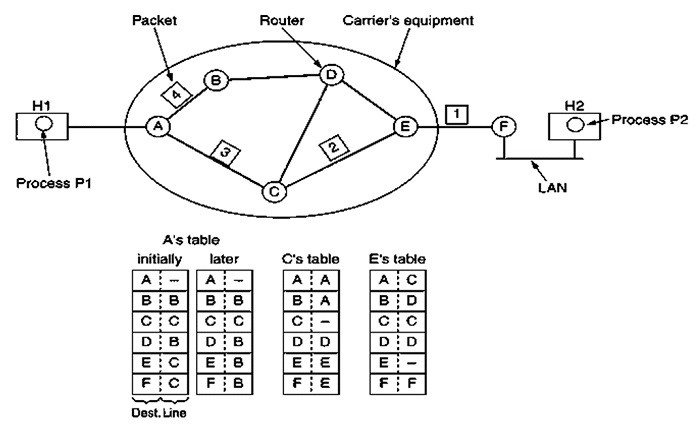 Let us discuss how datagram network works in stepwise manner −

Step 1 − Suppose there is a process P1 on host H1 and is having a message to deliver to P2 on host H2. P1 hands the message to the transport layer along with instructions to be delivered to P2 on H2.

Step 2 − Transport Layer code is running on H1 and within the operating system. It prepends a transport header to the message and the end result is given to the network layer.

Step 3 − Let us assume for this example a packet which is four times heavier than the maximum size of the packet, then the packet is broken to four different packets and each of the packet is sent to the router A using point to point protocol and from this point career takes over.

Step 4 − Each router will have an internal table saying where packets to be sent. Every table entry is a pair consisting of a destination and outgoing line to use for that destination. Only directly connected lines can be used.

Step 5 − For example A has only two outgoing lines to B and C, therefore every incoming packet must be sent to one of these routers, even if the ultimate destination will be some other router.

Step 6 − As the packets arrived at A, packet 1,2,3 and 4 were stored in brief. Then every packet is moved to C as per A’s table. Packet 1 is forwarded to E and then moved to F. When packet 1 is moved to F, then it will be encapsulated in a data link layer and sent to H2 over to LAN. Packet 2 and 3 will also follow the same route.

Step 7 − When packet 4 reaches A, then it was sent to router B, even if the destination was F. For some purpose A decided to send packet 4 through a different route. It was because of the traffic jam in ACE path and the routing table was updated. Routing Algorithm decides routes, makes routing decisions and manages routing tables.