What is the Microarchitectural implementation of branch processing?

Usually, the dedicated tasks are executed using dedicated hardware, like a BTAC, BTIC, or BHT. There are two methods to the basic tasks. All earlier pipelined processors and many recent processors execute branches by utilizing the pipeline stages available for common instruction processing as shown in the figure − 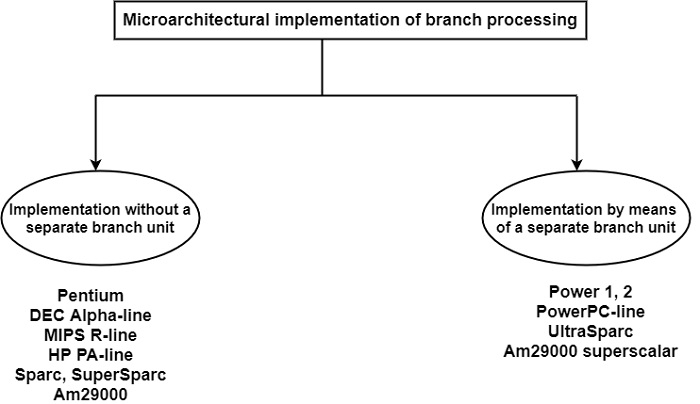 By contrast, some recent processors provide a separate unit, usually called a branch unit, to execute the basic tasks of branch processing. This approach decouples branch processing from general data manipulations and results in a more symmetrical structure of the microarchitecture. Furthermore, this approach also contributes to increased performance, since other units are released from subtasks of basic branch processing, such as address calculations.

Thus, branches can be processed in parallel with data manipulations. As shown in the figure, it shows the Power1, Power2, and PowerPC models follow this approach. Examples are the UltraSparc and Am29000 superscalar processors.

There is an effective technique to sharply reduce or to avoid, penalties for correctly predicted branches, such as the BTAC or the successor index in the I-cache schemes. Using these schemes, even zero-cycle branching is achievable as shown in the table. This table contains data on branch penalties in recent processors that use true static or dynamic prediction.

As shown in the table, its shows that although these techniques reduce misprediction penalties considerably, most recent processors require at least two or three cycles for recovery. The PA7200 and R10000 have in certain cases, only one or even no penalty cycles.