What is the implementation of a Lexical Analyzer?

Lexical Analysis is the first step of the compiler which reads the source code one character at a time and transforms it into an array of tokens. The token is a meaningful collection of characters in a program. These tokens can be keywords including do, if, while etc. and identifiers including x, num, count, etc. and operator symbols including >,>=, +, etc., and punctuation symbols including parenthesis or commas. The output of the lexical analyzer phase passes to the next phase called syntax analyzer or parser.

The main function of lexical analysis are as follows −

LEX generates Lexical Analyzer as its output by taking the LEX program as its input. LEX program is a collection of patterns (Regular Expression) and their corresponding Actions.

Patterns represent the tokens to be recognized by the lexical analyzer to be generated. For each pattern, a corresponding NFA will be designed.

Then NFA’s for corresponding patterns will be − 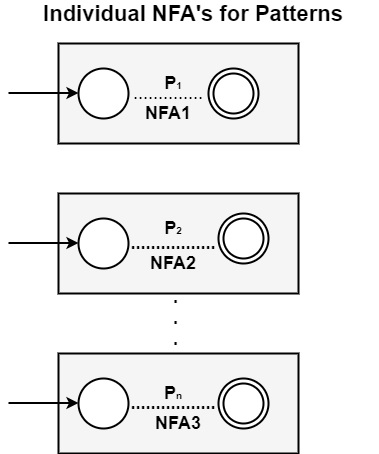 A start state is taken and using ϵ transition, and all these NFAs can be connected to make combined NFA − 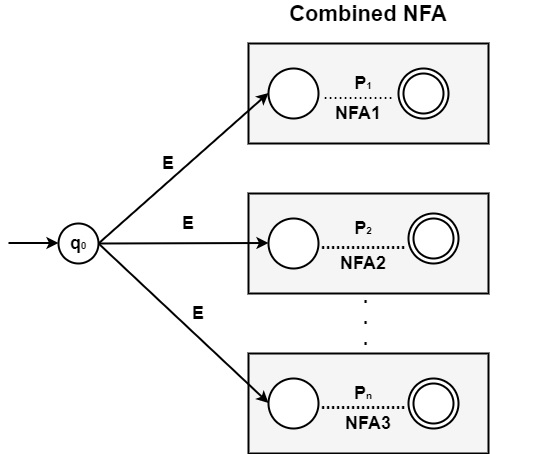 The final state of each NFA shows that it has found its token Pi.

It converts the combined NFA to DFA as it is always easy to simulate the behavior of DFA with a program.

The final state shows which token we have found. If none of the states of DFA includes any final states of NFA then control returns to an error condition.