What are the levels of computer system organization?

The level hierarchy of a computer system consists of different levels that connect the computer with the user which makes the use of the computer. It also explains how the computational activities are performed on the computer.

The different levels of computer system level hierarchy are as follows −

The figure given below depicts these levels − 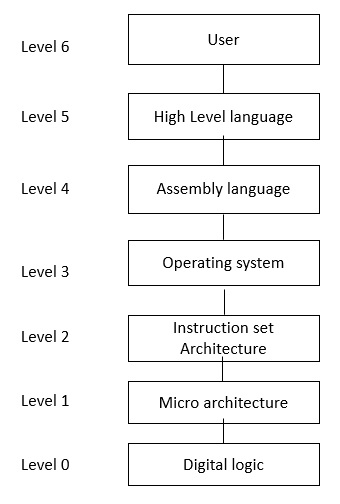 Let us discuss about each level hierarchy in detail −

ISA is an important part of a computer which acts as an interface between the lowestlevel software and the hardware. The ISA includes anything programmers use to make a binary machine language program work correctly, including instructions, I/O, etc. The ISA is functionality independent of the hardware.

Operating systems provide an interface between assembly language and the abstraction of the hardware architecture's instruction set. It generally contains many libraries which help a software developer connect to lower-level system functions (e.g., I/O, memory allocation, etc.) in an organized way.

Assembly is a detailed language that helps the systems programmer move information around in computer architecture in a specific way. For example, many compilers (programs that translate programming language into an assembly-like language) are written in assembly language. The advantage of using assembly language is speed and power in accessing various features of the hardware.

Provides a convenient interface and applications engine which helps the user produce results specific to a given application area.

Example − Microsoft PowerPoint is used for slides creation or for presentation or editing, Excel is used for accounting spreadsheets, Microsoft Word is used for documentation etc. The language at this level is a sequence of keystrokes or a high-level scripting language.For example − The high-level programming languages are C, C++, or Java.

It is the last level of computer system hierarchy. It consists of users and executable programs.