What are the levels of memory in the Operating System?

The memory hierarchy is depicted in the diagram given below − 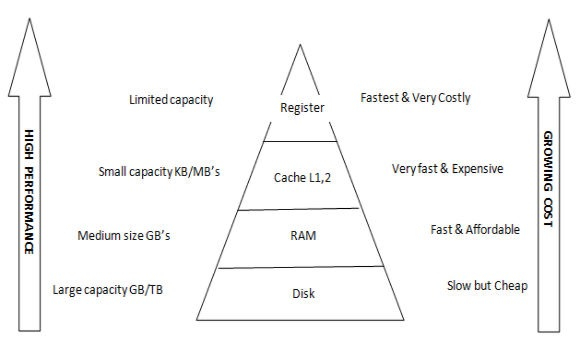 Let us discuss about each memory in detail.

Registers are very high speed memory, which is present inside the CPU. It is a temporary storage device that means it stores the data temporarily. Generally, they create a general purpose register file to store data. The register file capacity is 32 data words, and each register can be read or written from within a single clock cycle.

The cache memory is the next level to the register. It is also a temporary storage device. It is placed logically in between the CPU registers and main memory.

The storage capacity of a cache is less when compared to main memory, but accessing time of cache is faster than main memory and slower than register, because some or all of it can reside on the same IC as the CPU.

The caches are essential components for the high performance computers.

It is an external memory present on the motherboard, that stores programs and data which is active in use. In primary memory, storage locations are addressed directly with the help of load and store instruction of the CPU.

Whereas an IC Technology is similar to the CPU register file that is used, but access is slower due to large capacity of main memory and at the same time it is separated from the CPU. Access time of five or more clock cycles is usual.

For example − The secondary memory is magnetic hard disks, pen drives and CD-ROMs etc. The storage capacity is typically in gigabytes and access time is measured in milliseconds.