What is the abstract view of the components of a computer system?

A computer system consists of many resources like hardware and software, which are useful to complete a task. The common required resources are input/output devices, memory, file storage space, CPU etc.

An operating system is the interface between the user and the machine. Before there were operating systems, people only used computers using Analog signals and digital signals. Along with the development of knowledge and technology, currently there are various operating systems with their respective advantages.

The abstract view of components of computer system is as follows − 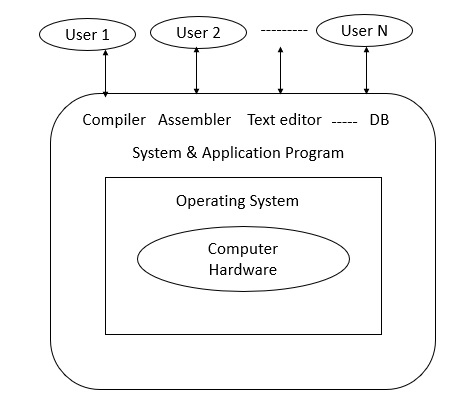 A computer system can be divided into four components, which are as follows −

Hardware − The hardware is the physical part which we can touch and feel, the central processing unit (CPU), the memory, and the input/output (I/O) devices are the basic computing resources of a computer system.

Users − There are different types of users like people, machines, and even other computers which are trying to solve different problems.