Pivoting is a technique that Metasploit uses to route the traffic from a hacked computer toward other networks that are not accessible by a hacker machine.

Let’s take a scenario to understand how Pivoting works. Assume we have two networks −

The hacker will try to hack the second network this machine that has access in both networks to exploit and hack other internal machines. 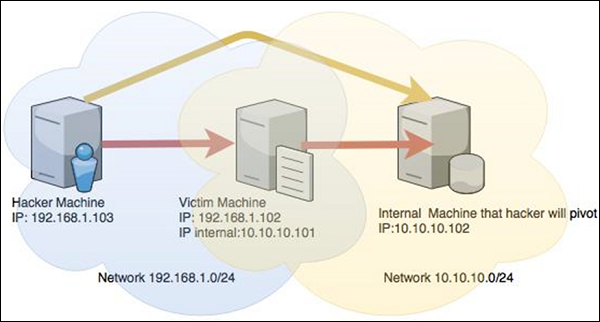 Let’s try to understand how it works. We will take a Windows Server 2003 system with DCOM vulnerability and we will use this vulnerability to hack this system.

The exploit for this will be ms03_026_dcom and we will use meterpreter payload.

Now that we gained access to this system, let’s interact with the session with the command session -i 1 where "1" is the number of the session that was created.

Now, let’s use the command ipconfig to find out if this host has access to other networks. The following screenshot shows the output. You can observe that this host is connected with two other networks −

Metasploit has an AutoRoute meterpreter script that will allow us to attack this second network through our first compromised machine, but first, we have to background the session.

Now that we have route the traffic (Pivot), we can try to scan the host found in this network.