Payload, in simple terms, are simple scripts that the hackers utilize to interact with a hacked system. Using payloads, they can transfer data to a victim system.

Metasploit payloads can be of three types −

Let’s take an example to understand the use of Metasploit payloads. Assume we have a Windows Server 2003 machine which is vulnerable to DCOM MS03-026.

At first, we will search for an exploit that can work with this vulnerability. We will use the exploit with the best RANK. 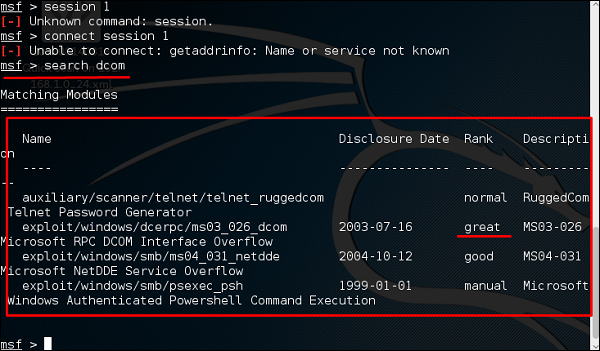 Next, we will use the following command to see what payload we can use with this exploit.

and see I can use payloads that will help me to upload /execute files, to make the victim as a VNC server to have a view.

The above command will show the payloads that will help us upload/execute files onto a victim system.

To set the payload that we want, we will use the following command −

Type “exploit”. It will create a session as shown below −

Now we can play with the machine according to the settings that this payload offers.