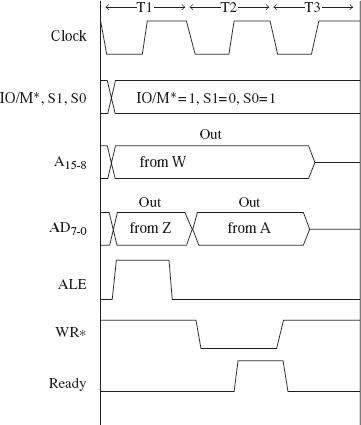 The point to be noted that in an IOW machine cycle, Wand Z registers have identical 8-bit port address. There is also a definite advantage because of address duplication on the addresses ranging from A15-8 and AD7-0 when we are using 8755 (2K × 8 EPROM and two 8-bit ports) and 8155 which is a combination of 256 × 8 RAM, 3 Input Output ports, and 14-bit timer. We can form a 8085-based microcomputer by using only these two chips in addition to 8085 processor. Moreover, these chips do not favor in these days, except when the minimum chip microcomputer configuration is desired for usage.

Example: In 8085 Instruction set, OUT is a mnemonic that stands for OUTput Accumulator contents to an output port whose 8-bit address is indicated in the instruction as a8. It occupies 2 Bytes in the memory. First Byte specifies the opcode, and the next Byte provides the 8-bit port address.

OUT instruction is the only instruction using which Accumulator contents can be sent out to an output port. A possible chip select circuit to connect an output port with an address as F0H is as shown in the followingFig. 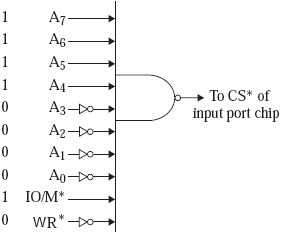 All these bits will pass through a NAND Gate to product the output logic 1 as Chip-Select (CS), and so the output port chip gets selected. Thus, the chip responds when the 8085 sends out address as F0H, IO/M* as 1, and WR* as 0. In other words, we consider that it is having the output port number F0H.

Notice that it is possible to have an input port with the address F0H, and an output port with the same address F0H. When the 8085 sends out the address as EFH and IO/M* as 1, only one of them is selected based on the RD* and WR* signal status values. Thus, it is possible to have a total of 256 input ports and a total of 256 output ports.

Summary: So this instruction OUT requires 2-Bytes, 3-Machine Cycles (Opcode Fetch, Memory Read, I/O Write) and 10 T-States for execution as shown in the timing diagram.