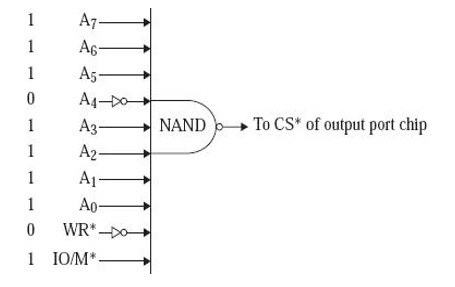 Such I/O ports, which are addressed by the processor by sending out IO/M* as logic 1 are called I/O-mapped I/O ports.

In case of IN instruction, the current 8-bit content of the PORT# will be made available on to the Accumulator. Let us suppose with the PORT#, 8 DIP switches are connected. And their states are ON-ON-OFF-ON-ON-ON-OFF-ON. So after execution of the instruction IN PORT#, the Accumulator content will be 1101 1101.

In case of OUT instruction, the current 8-bit content of the Accumulator will be copied on to the PORT#. Let us suppose that Accumulator’s initial content is 0101 0101. And with the 8-bit port 8 LEDs are connected. So after execution of the instruction OUT PORT#, LEDs will have the states as shown below −