The three clock cycles at the last stages in the IN 35H instruction is an example of machine cycle for IOR. The Waveforms for the IOR machine cycle are shown in the figure below. 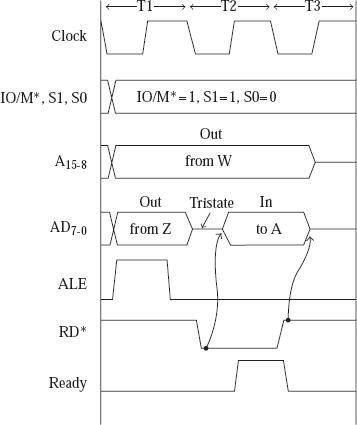 Example: In 8085 Instruction set, IN is a mnemonic that stands for INput the Byte from input port’s content to the Accumulator. Input port’s 8-bit address is indicated in the instruction as a8. It occupies 2 Bytes in the memory. First Byte specifies the opcode, and the next Byte provides the 8-bit input port address.

IN instruction is the only instruction using which read the input port content to the Accumulator. A possible chip select circuit to connect an input port with an address as F0H is as shown in the followingFig. 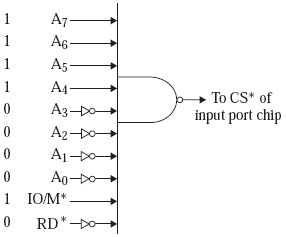 All these bits will pass through a NAND Gate to product the output logic 1 as Chip-Select (CS), and so the input port chip gets selected. Thus, the chip responds when the 8085 sends out address as F0H, IO/M* as 1, and RD* as 0. In other words, we consider that it is having the input port number F0H.

Summary: So this instruction OUT requires 2-Bytes, 3-Machine Cycle (Opcode Fetch, Memory Read, I/O Read) and 10 T-States for execution as shown in the timing diagram.