This occurred in three consecutive evolution phases as the first phase is represented by traditional von Neumann processors, which are characterized by sequential issues and sequential execution of instructions as shown in the figure.

The search for greater implementation gave advance to the introduction of parallel instruction execution. Parallel execution was achieved by using one of two orthogonal concepts by the introduction of multiple (non-pipelined) execution units, or by emerge. Due to early ILP-processors used sequential instruction problems, the second procedure of the evolution is characterized by scalar ILP-Processors.

Instruction issues evolve into a bottleneck, as Flynn (1966) had foreseen long earlier. Therefore, the third stage in the evolution of the von Neumann processor became certain when sequential instruction issues had to be restored with a parallel issue. As a result, superscalar ILP-processors start to occur. They were first executed as statistically scheduled VLIW architectures, which issue multi-operation instructions.

Pipelining offers higher performance at a cost of increased hardware complexity. Accordingly, pipelined processors were first employed in very expensive super and vector processors, around 1970. Subsequently, pipelined instruction processing became the standard implementation in mainframes and, in the 1980s in microprocessors.

Most dedicated functional units such as FX or FP EUs also became pipelined. At current, pipelined EUs are generally used as building blocks of advanced processors, such as VLIWs or superscalar processors. For example, the PowerPC 601 has three pipelined EUs, one each for FX, FP, and branch execution.

The other class of ILP-processors consisting of VLIW and superscalar processors, differs substantially from pipelined processors in that they use replication that is multiple EUs. The basic structure of both VLIW and superscalar processors includes several EUs, each adequate of parallel operations on data fetched from a register file as displayed in the figure. In both types of processors, various EUs execute instructions and write back results into the register file together. 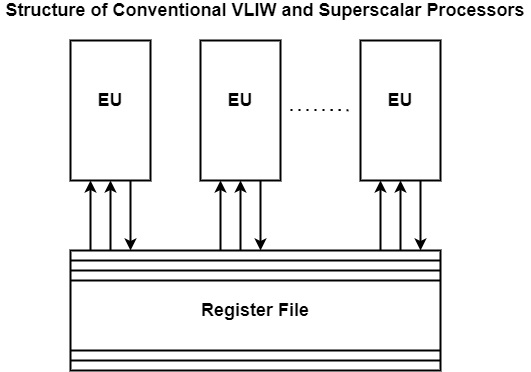