What is Ethernet evolution in computer networks?

Ethernet was developed at Xerox PARC between 1973 and 1974. Engineer Bob Metcalfe invented it for interconnecting advanced computer workstations, making it possible to send data to one another and to high-speed laser printers.

It was originally intended to create a network in a small area known as a Local Area Network (LAN).

The Ethernet evolution is diagrammatically represented as follows − 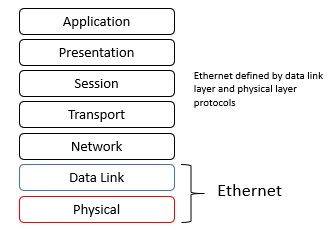 Ethernet operates across two layers of OSI models. The model provides a reference to which ethernet can be related but it is actually implemented in the lower half of the data link layer, which is called as Medium Access control (MAC) sublayer and the physical layer only.

Ethernet at layer 1 involves signals, and bit streams that travel on the media, physical components that put signals on media, and various topologies. Ethernet Layer 1 performs a main role in the communication which takes place between devices, but each of its functions has their limitations.