Trace scheduling is based on the concept of trace. A trace is an execution path within a loop, such that a trace can include conditional branches and join points. As shown figure (a) it shows the traces identified in a flow graph. 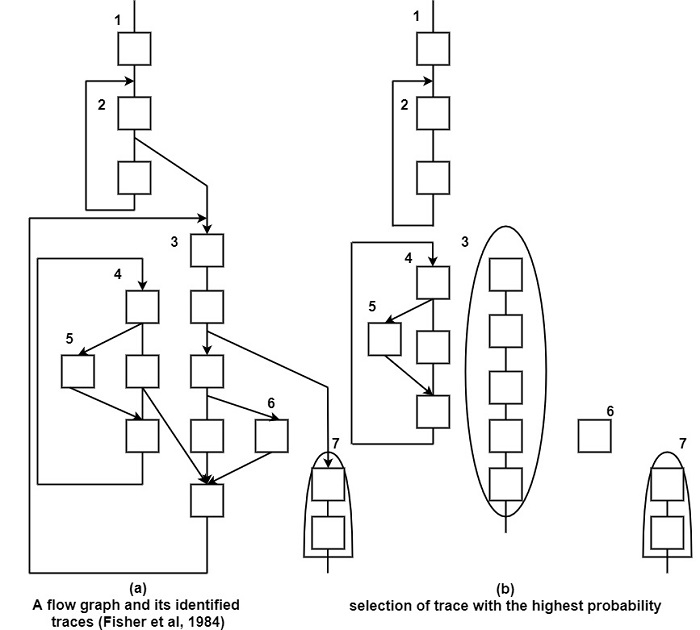 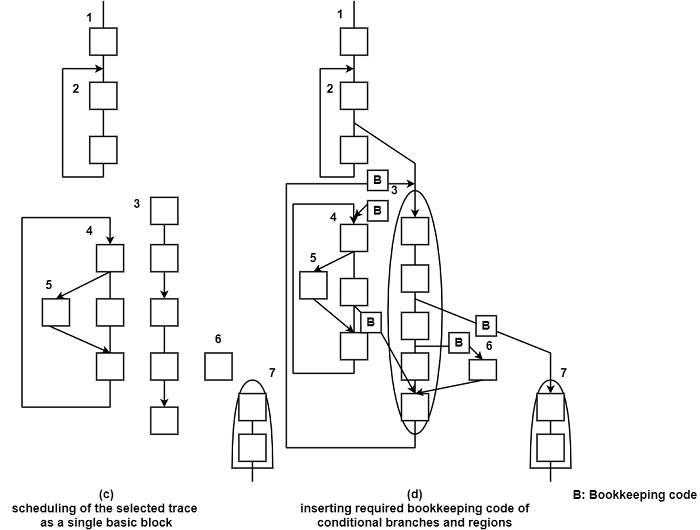 In selecting the most likely trace, the compiler uses dynamic branch prediction as well as hints supplied by the programmer. As shown in figure (a), let us assume that trace no.3 has the highest probability, and therefore it will be scheduled first as shown in figure (b).

Each trace is scheduled as if it were a single basic block as shown in figure (c). In this case, scheduling is global, during scheduling independent instructions can be moved across conditional branches or join points. Bookkeeping code will also be generated and placed into the appropriate path of conditional branches and joints as shown in figure (d).

After completing the schedule for trace no 3, the next most probable trace is selected, say trace no 4, then this trace is scheduled, and so on.

This global scheduling method is intended to avoid the serious inefficiency problems of the existing VLIW compilers caused by long compilation times and code explosion (Moon et Ebcioglu, 1992). It can be applied for both VLIWs and a superscalar processor such that this method first delivers a superscalar code and it required, in a second step VLIW code can be obtained through a local transformation.

FRGS is quite a complex method. First, in each cycle, FRGS selects all operations available for a schedule (so-called greedy selection). A software window is used to limit the required amount of computation. Then a simple heuristics are used to select an operation from the availability list for the next schedule, to utilize the hardware resources as far as possible.