If a parent detects the sound of approaching tires screaming, she could instinctively grab her child from the curb. Students keep saying, "Emotions are running wild!" before their exams. Alternatively, a man instinctively moves away from a barking dog. Nevertheless, what enables people to experience what is happening to engage in these behaviors? 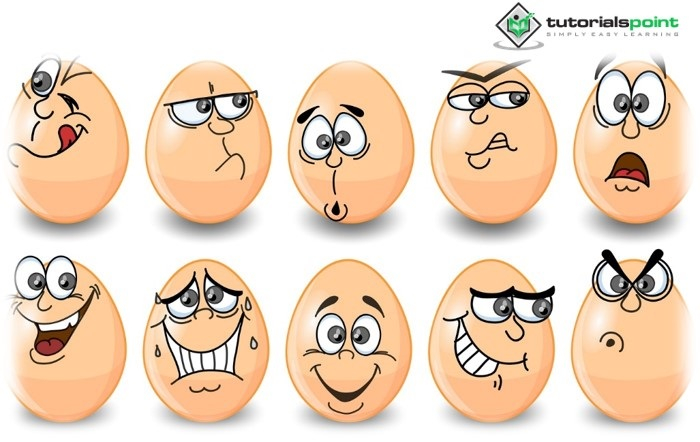 Charles Darwin was the first to think about the physiology of emotion. Darwin learned via his research on evolution how emotions constitute mental phenomena that everyone, regardless of culture, shares. He was particularly drawn to children because, in his opinion, their emotional expression is both pure and potent. He considered them the ideal subjects for researching the significance of emotion since they can rarely feign an expression or repress their sentiments. Darwin also conducted the first comparison of emotion across species in his 1872 book, The Expression of the Emotions in Man and Animals.

He demonstrated the existence of unconscious emotional components in humans and animals and emphasized how successfully these unconscious components have been preserved throughout evolution.

Emotions like fear, pleasure, jealousy, rage, and enthusiasm are too common. These emotions are partly automatic, the brain mechanisms that control their work without our conscious awareness. We experience sentiments we are completely aware of while also enabling us to label these emotions as fearful, furious, cranky, astonished, or pleased. By demonstrating how these ostensibly separate types of cognition are continually interacting, the investigation of emotions and moods aids in illuminating the flimsy distinctions between conscious and unconscious mental processes.

Our emotions all consist of two parts. The first develops instinctively and takes on an external form, while the second expresses itself subjectively and internally. These two elements were described by the eminent American psychologist William James in his 1884 essay "What Is an Emotion?" James made a stunning realization: In addition to the brain and body communicating, the body and brain communicate.

Valence and intensity are two axes that can be used to categorize emotions. Valence is concerned with the characteristics of emotion, specifically how something induces us to feel on a continuum from avoidance to approach and how good or awful. The term "intensity" describes an emotion's force and level of arousal. We can map the majority of emotions into these two axes. Even though a map like this cannot fully describe an emotion, it conveys it in a way that helps correlate facial gestures to the neural circuits that cause them.

Four brain regions play key roles in emotion: the striatum, which is engaged in habit formation, which includes addiction; the amygdala, which synchronizes emotion; the hypothalamus, which serves as the implementer of emotion; and the pre-frontal cortex, which further assesses whether a given emotional reaction is appropriate for the moment at hand. The striatum and amygdala are under the partial control and interaction of the pre-frontal cortex. 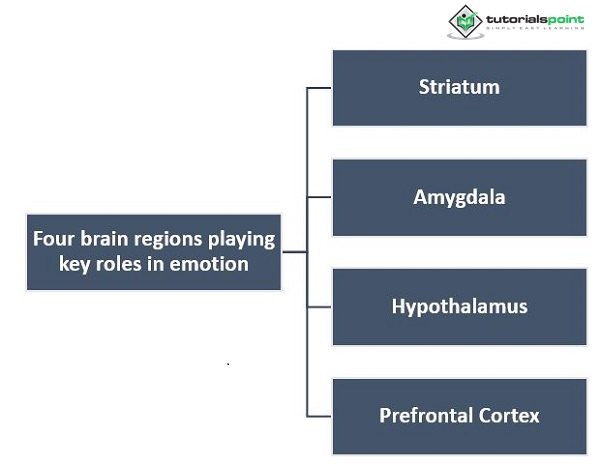 Because it connects the subconscious and conscious parts of emotionality, the amygdala is called "orchestrating" emotion. The hypothalamus and other brain regions that regulate our natural physiological reactions play a major role in relaying the amygdala's reactions when it obtains sensory inputs from the sections of the brain that are accountable for vision, sound, and contact. When we laugh or cry—or feel any emotion—these brain regions answer the amygdala and carry out its commands. The pre-frontal cortex, particularly controls the affective experience, the conscious components of emotion, and how emotion affects cognition, is likewise related to the amygdala.

The Limbic System heavily influences emotion, and the Amygdala is one structure with a significant impact. According to research, there are two routes in the brain that sensory input regarding emotional experiences travels along. The thalamus receives the information, then concurrently travels to the brain's cortex and amygdala. Rapid processing by the amygdala results in signals being sent to the hypothalamus, which then triggers the autonomic nervous system. Contrarily, the cortex moves through information more slowly, enabling people to assess or judge an experience.

Amygdala − A tiny almond-shaped component located deep within the temporal lobe links to the hippocampus and other important brain regions. These linkages enable the amygdala to perform its crucial function in the modulation and regulation of significant affective behaviors such as companionship, romance, and passion, on emotion presentation, and primarily on fear, fury, and hostility. The amygdala is essential for self-preservation because it is the brain region responsible for identifying the threat. When activated, it causes dread and worry, which cause the animal to enter a vigilance stage as it prepares to run away or flee. The animal is tamed by experimentally destroying both of its amygdalas (there are two of them, one in each hemisphere), which renders it affectionless, sexually non-discriminatory, and oblivious to threat. These structures' electrical stimulation causes violent aggression to flare up. People with severe amygdala lesions lose the emotional significance of external information, such as seeing a familiar face. Although the individual is aware of who the other person is, he cannot determine if he prefers or despises him (or her). Injury to the amygdala prevents the proper processing of fear. Animals without functioning amygdalas are unable to learn conditioned responses to fear. Even if they are still capable of feeling fear personally, persons with impaired amygdalas cannot detect another person's fear.

Thalamus − Modifications in emotional reactivity are linked to thalamic lesions or excitation. The connections between the thalamus and other limbic system elements, rather than the thalamus itself, give the thalamus its significance in controlling emotional behavior. The cerebral cortex, the hypothalamus, and other vital components of Papez's circuit are connected to the thalamus.

Hypothalamus − It is also thought that the hypothalamus affects emotion. Its lateral components appear to engage in wrath and pleasure, whereas the center part is engaged in aversion, dissatisfaction, and a propensity for excessive loud laughter. Nevertheless, the hypothalamus is more involved in how emotions are expressed than in how feelings are initially generated. When emotional symptoms manifest physically, the danger they present travels from the limbic centers to the pre-frontal nuclei via the hypothalamus, heightening anxiety. This negative feedback process has the potential to be so potent as to cause panic.

Cingulate Gyrus − The center portion of the brain is where it is situated. Although there is still much to learn about this gyrus, it is now known that its frontal region links positive memories of prior feelings with odors and visuals. Additionally, this area has a role in the control of aggressive behavior and the emotional response to pain. Wild animals become completely domesticated when the cingulate gyrus is removed (a cingulotomy). By preventing neuronal connection across the Papez's circuit, a single bundle of this gyrus is cut (a procedure known as a cingulotomy), lowering levels of anxiety and depression.

Autonomic Nervous System Activation − The autonomic nervous system supervises all the body's automatic processes. The sympathetic arm of the autonomic nervous system, which primes the body for action, starts to function when an emotional event occurs. The adrenal gland, which expels adrenaline and norepinephrine hormones, receives signals from it. In turn, these hormones equip an individual to face the difficulties of the situation. The physical reactions listed below are telltale markers in both men and women − 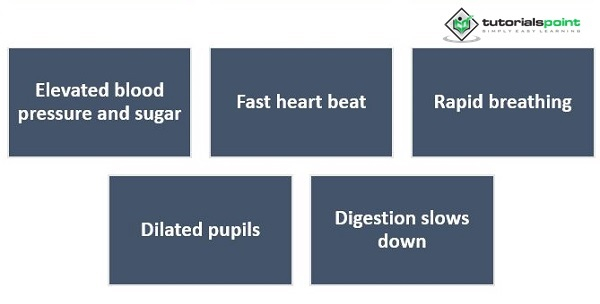 It is evident that without a biological basis, the experience of emotions in humans or other animals is incomplete and implausible. Therefore, diving into the physiological understanding of the same is quintessential to understanding how our emotions develop and function.