This example demonstrates the use of the analogWrite() function in fading an LED off. AnalogWrite uses pulse width modulation (PWM), turning a digital pin on and off very quickly with different ratios between on and off, to create a fading effect.

Follow the circuit diagram and hook up the components on the breadboard as shown in the image given below. 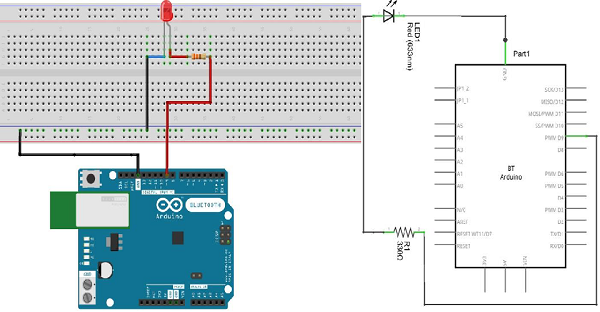 Note − To find out the polarity of an LED, look at it closely. The shorter of the two legs, towards the flat edge of the bulb indicates the negative terminal.

Components like resistors need to have their terminals bent into 90° angles in order to fit the breadboard sockets properly. You can also cut the terminals shorter. 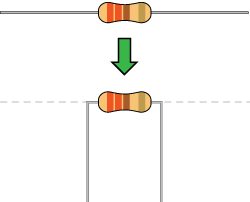 Open the Arduino IDE software on your computer. Coding in the Arduino language will control your circuit. Open the new sketch File by clicking New.

After declaring pin 9 as your LED pin, there is nothing to do in the setup() function of your code. The analogWrite() function that you will be using in the main loop of your code requires two arguments: One, telling the function which pin to write to and the other indicating what PWM value to write.

In order to fade the LED off and on, gradually increase the PWM values from 0 (all the way off) to 255 (all the way on), and then back to 0, to complete the cycle. In the sketch given above, the PWM value is set using a variable called brightness. Each time through the loop, it increases by the value of the variable fadeAmount.

analogWrite() can change the PWM value very fast, so the delay at the end of the sketch controls the speed of the fade. Try changing the value of the delay and see how it changes the fading effect.

You should see your LED brightness change gradually.