Pushbuttons or switches connect two open terminals in a circuit. This example turns on the LED on pin 2 when you press the pushbutton switch connected to pin 8. 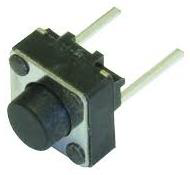 Pull-down resistors are used in electronic logic circuits to ensure that inputs to Arduino settle at expected logic levels if external devices are disconnected or are at high-impedance. As nothing is connected to an input pin, it does not mean that it is a logical zero. Pull down resistors are connected between the ground and the appropriate pin on the device.

An example of a pull-down resistor in a digital circuit is shown in the following figure. A pushbutton switch is connected between the supply voltage and a microcontroller pin. In such a circuit, when the switch is closed, the micro-controller input is at a logical high value, but when the switch is open, the pull-down resistor pulls the input voltage down to the ground (logical zero value), preventing an undefined state at the input.

The pull-down resistor must have a larger resistance than the impedance of the logic circuit, or else it might pull the voltage down too much and the input voltage at the pin would remain at a constant logical low value, regardless of the switch position. 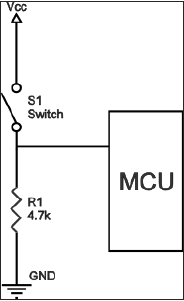 When the switch is open, (pushbutton is not pressed), there is no connection between the two terminals of the pushbutton, so the pin is connected to the ground (through the pull-down resistor) and we read a LOW. When the switch is closed (pushbutton is pressed), it makes a connection between its two terminals, connecting the pin to 5 volts, so that we read a HIGH.

LED is turned ON when the pushbutton is pressed and OFF when it is released.