What is the performance measure of branch processing in computer architecture?

It can evaluate and compare different branch processing techniques, it can require a performance measure. Let us consider the execution of a branch instruction in a four-stage pipeline as shown in the figure. If the branch is processed straightforwardly, the branch target address (BTA) will be computed in cycle ti+3. 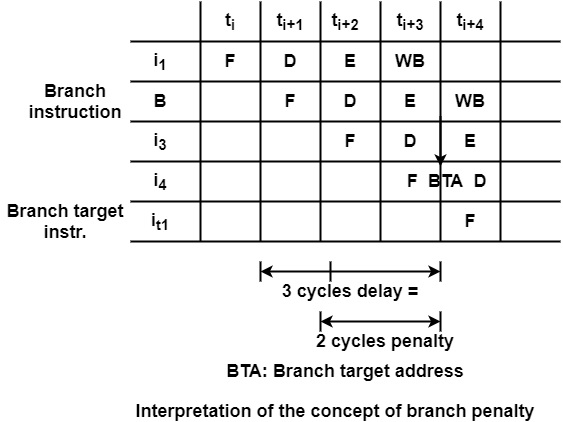 This means that the 80386 requires, on average, 6.5 additional cycles for each branch. In contrast, the i486 has a substantially enhanced branch mechanism. Its effective branch penalty is

Which is considerably less than the penalty of 80386.

A further typical situation is when branch processing uses branch prediction. In this case, a prediction is made for each branch by guessing whether the branch in question will be taken or not. Let us consider the following notation −

Then, the effective penalty of branch processing can be expressed as −

In this straightforward case, the effective branch penalty can be calculated as

For the calculation, let us suppose an average misprediction penalty of 3.5. When it assumes a branch prediction accuracy of 0.9 (that is, fc=0.9 and fm=0.1) we get the effective branch penalty of this processor

That is Pentium requires, on average, only 0.35 additional cycles for branches.