What is the history of Padmanabhaswamy temple?

Shri Anantha Padmanabhaswamy temple is located in the East fort at Pazhavangadi of Thiruvananthapuram, Kerala. This is the temple of Lord Shri Vishnu which is an ancient structure that was even visited by Balarama, according to Srimad Bhagavatam. This temple also has references in Epics and Puranas like Skanda Purana and Padma Purana. According to the ancient scriptures, it was believed to be built over 5000 years ago but has no perfect pieces of evidence. There is a holy tank called Padma Theerdham meaning lotus spring near the temple. 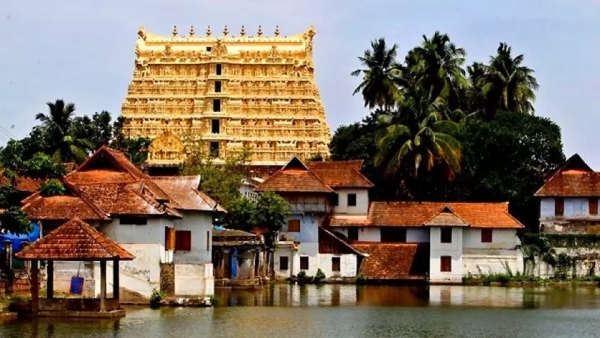 This temple has recently got very famous for its hidden treasures with which it is claimed to be the richest temple in the world.

The History Behind This Temple

There used to be a great Vishnu devotee called as Divakar Muni at Aanarthadesa who performed his daily rituals and pujas in a perfect manner without fail. One day, the Muni saw a little boy near his ashram and got so fascinated that he requested the boy to stay with him. The boy agreed on a condition that he should never be insulted. The Muni used to tolerate the childish acts of this boy with patience. But one day when Muni was performing puja, the boy took the Salagrama to which the muni offers his prayers and kept it in his mouth and defiled it, at which the Muni got enraged that he chastised and asked the boy to leave the place immediately. The boy while leaving said to Muni to come to Ananthankaadu if he wants to meet him.

After a while, the Muni realized the boy to be Lord Vishnu himself who responded to his prayers of blessing him with 'Divya Darshanam'. Then the Muni who left in search of that boy, came finally to Ananthankaadu only to witness the boy merging into an Iluppa tree (Indian Butter tree) and the tree falling down and emerging into a huge Vishnu idol. The idol was too huge that the head of it was at Thiruvallam, which is three miles from the east fort and the feet were at Trippapur, which is five miles towards north from the place. 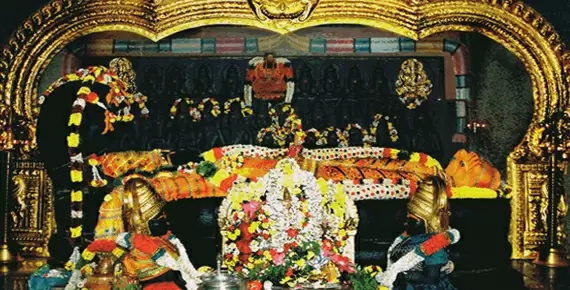 Then the Muni prayed Lord Vishnu to shrink to the size that he can behold him for which the idol was shrunk to 18ft size. The Muni then offered some raw mango which he got from some nearby place, keeping in a coconut shell. This offering still continues in this temple as a custom.

The main Idol of Shri Anantha Padmanabhaswamy is located in the sanctum sanctorum of the temple where the presiding deity is Lord Vishnu reclining on Anantha (also called as Seshnag or the hooded serpent) with his right hand on Sivalinga and having a lotus in his left hand. The lord Brahma is seen in the lotus flower which is originated from the navel of the Lord Vishnu. 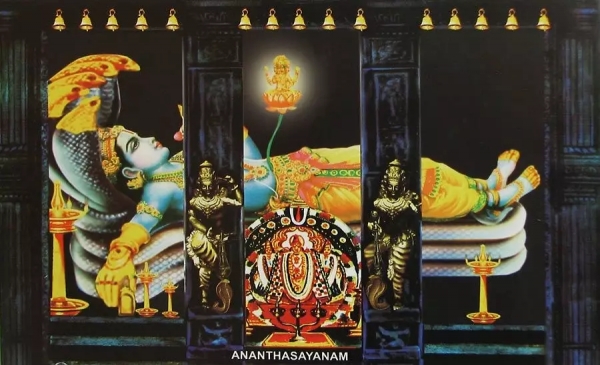 The idol is 18ft long and can be seen through three doors, which means head and chest through the first door, hands through the second door and feet through the third door. This posture is called as Anantha Sayanam meaning Yogic sleep. The idols of Sridevi, Bhudevi along with Narasimhaswamy, Ganapathi and Gajalakshmi are seen beside this idol.