What is mundan ceremony or mundan sanskar and why is it necessary?

In Hindu tradition, Mundan ceremony refers to a child's first ever haircut. This practice follows the age-old tradition in Hinduism to initiate any new milestone with a ceremony on an auspicious day. For instance, there are ceremonies to celebrate the opening of a new house, new business, new vehicle, new harvest, and so on.

All these are in many ways connected the Hindu belief in rebirth and past life. Keep making new beginnings and hope and pray for better compliance with the way of God. It's believed that there have been some shortcomings in our past lives that should be corrected in this lifetime in our journey towards Moksha.

The Mundan ceremony of a Hindu child has similar significance as it is believed that this ritual rids the child of the backlog of his or her bad Karma in past life. This metaphysical rationale is of primary importance in relation the child's Mundan and only thereafter, are other more physical attributes considered.

It needs to be remembered that the date and time of a child's Mundan also have to be done as per the Hindu calendar and the child's astrological horoscope or Janampatri. The date and time, referred to as the Mahurat, is of course set by the priest after consulting the child's horoscope. 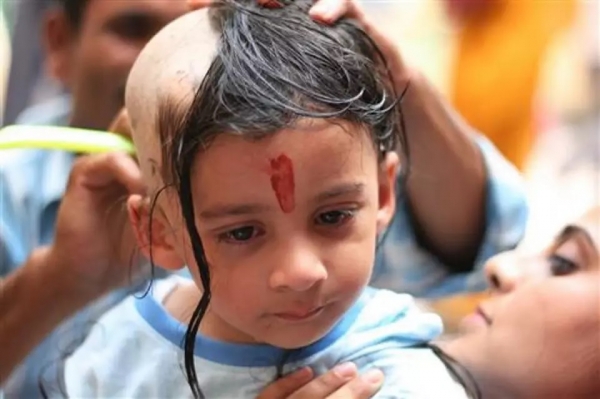 There are also strictures with respect to the age of the child when s/he undergoes Mundan; hence it can be done when the child attains the age of one, three, eight or sixteen, the last two age limits being more appropriate for the girl child since most girls don't regularly need a haircut like boys. Trends are changing though, with girls also going for regular hairdressing and trimming which means that Mundan is carried out by the age of three for children of both genders. In relation to the physical attributes of the ritual, it is believed that Mundan at the tender age of one or three ensures healthy hair growth for the child.