What is .git folder and why is it hidden?

Git is currently the most popular version control system. A version control system records the changes made to our project codebase in a special kind of file system-based database. In Git, this database is known as a repository and its structure is inspired by the Linux file system. The repository maintains a history of the changes to our codebase.

The .git folder contains all information that is necessary for the project and all information relating commits, remote repository address, etc. It also contains a log that stores the commit history. This log can help you to roll back to the desired version of the code.

The hidden .git folder can be viewed using the following command in the git bash terminal −

The output of the command is shown below −

The contents of the .git folder can be viewed using the tree command in a Windows Operating System.

To switch from the git bash terminal to Windows terminal, type the cmd command.

The user is presented with the Windows terminal now. Navigate to the .git folder and use the tree command to inspect the contents of this folder. 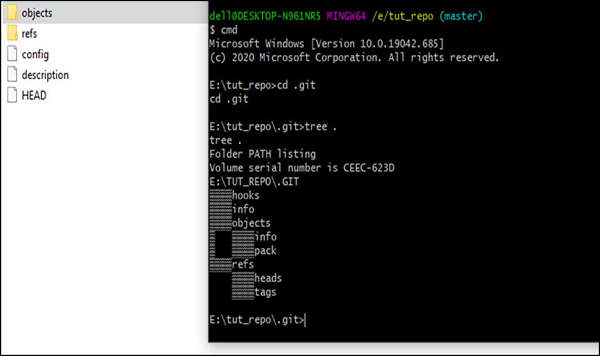 Following are a few important sub−directories and files in the .git folder −

The .git folder will contain details of every single change made to the code base. All snapshots of the modifications will be recorded in this folder like a database, which makes it possible to undo the changes and rollback to the desired version of the code.

The .git folder is hidden to prevent accidental deletion or modification of the folder. The version history of the code base will be lost if this folder is deleted. This means, we will not be able to rollback changes made to the code in future.