What are the Routers in Computer Network?

Router is a particular type of device used to connect two or more subnets that cannot be similar. These devices support connectedness between two LANs or two WANs over the large geographical range. The routers evaluate the best route from a sender to a receiver. For this, they perform in a routing protocol to create the network topology, and the data thus gathered is used to evaluate routes. They operate at the OSI model’s network layer and accommodate all the subnetworks differences up to this layer to provide a uniform network service to the nodes transport layer entities.

Routers are generally a mixture of hardware and software. The hardware includes physical interfaces to various networks, while the software consists of operating system and routing protocol. They use both logical and physical transmitting to link two or more logically separated networks. The figure shows three types of LANs connected by a single router. 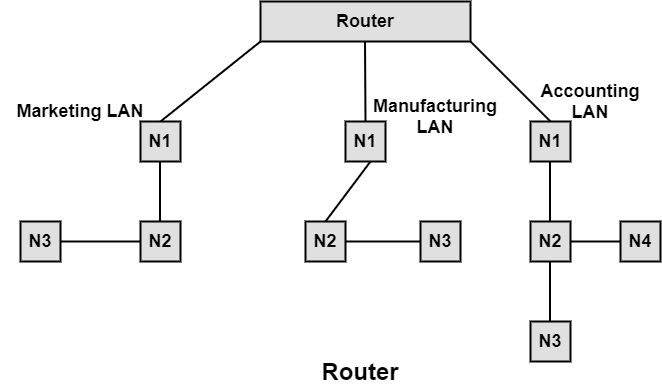 For this, each network to be connected is allocated a logical address, and then these logical segments are combined by the router in a large network. They use the store and forward technique to transmit the message, i.e., receive messages, check their destination and send the needed LAN message.

There are various types of routers that are as follows −

Central router is a router that acts as the backbone of a network. It connects many LANs.

The local router has limitations to operate within the limits of its LAN driver’s cable length limitations.

A remote router uses modems or remote connections to connect the LANs beyond its device driver limitations.

Internal router is a part of the network file server, and it routes the data accordingly.

The external router is located in a workstation on the network.