In order to predict the voltage regulation of the alternator by the MMF method, the following information is required −

Step 1 – The armature terminal voltage per phase (V) is taken as the reference phasor along OA as shown in Figure-1. 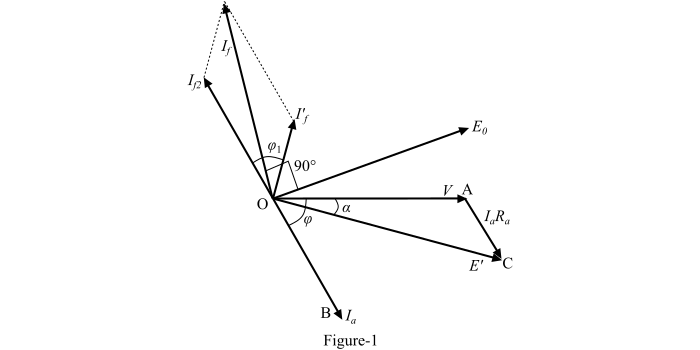 Step 2  – The armature current phasor (𝑰𝒂) is drawn lagging behind the voltage phasor (V) by a lagging power factor angle φ for which the voltage regulation of the alternator is to be calculated.

Step 3 – Draw the armature resistance drop phasor (𝑰𝒂𝑅𝒂) in phase with (𝑰𝒂) along the line AC. Now, join O and C and the phasor OC represents the EMF E’.

Step 4 – From the open-circuit characteristic (O.C.C.) as shown in Figure-2, the field current (𝑰′𝒇) corresponding to the EMF (E’) is noted. Then, draw the phasor for the field current (𝑰′𝒇)) leading the EMF (E’) by 90°. It being assumed that under the short-circuit condition, all the excitation is opposed by the MMF of the armature reaction and armature reactance. Hence,

Step 7 – Hence, the voltage regulation of the alternator can be determined from the expression given as follows −

Thus, the resultant field current is