The zero power factor characteristics (ZPFC) is the graph plotted between the armature terminal voltage per phase and the field current, when the machine being operating with constant rated armature current at synchronous speed and zero lagging power factor. The ZPFC is also known as Potier Characteristics after its originator.

In order to maintain the power factor very low, the alternator is loaded by means of reactors or by an under-excited synchronous motor. The shape of the ZPFC is very much like that of the open-circuit characteristic (O.C.C.) displaced downwards and to the right.

Here, the terminal voltage per phase (V) is taken as the reference phasor. At zero power factor lagging, the armature current (𝐼𝑎) lags behind the voltage V by 90°. The voltage drop (𝐼𝑎𝑅𝑎) in the armature resistance is drawn parallel to the current (𝐼𝑎) and the drop (𝐼𝑎𝑋𝑎𝐿) in the leakage reactance perpendicular to (𝐼𝑎).

Hence, the generated voltage per phase is then,

The three MMF phasors 𝐹𝑓 , 𝐹𝑟 and 𝐹𝑎𝑟 are in phase and their magnitudes are related by the following equation −

If the armature resistance (𝑅𝑎) is neglected, the resulting phasor diagram will be as shown in Figure-2. From Figure-2, it can be seen that the terminal voltage per phase (V), the reactance voltage drop (𝐼𝑎𝑋𝑎𝐿) and the generated voltage (𝐸𝑔) are all in phase. Hence, the terminal voltage (V) is practically equal to the arithmetical difference between 𝐸𝑔 and 𝐼𝑎𝑋𝑎𝐿i.e.,

The arithmetical expressions given in eqns. (2) and (3) form the basis for the Potier triangle.

Also, Eqn. (2) can be transformed into its equivalent field current form by dividing both sides by the effective number of turns per pole (𝑇𝑓) on the rotor.Thus, 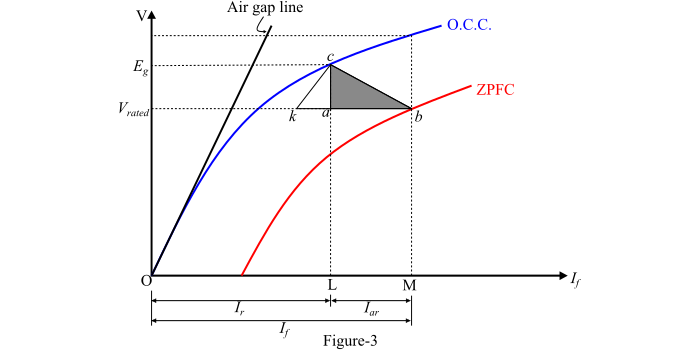 Consider a point b on the ZPFC corresponding to the rated terminal voltage (V) and a field current of (𝑂𝑀 = 𝐼𝑓).

Now, the triangle formed by the vertices a, b and c is known as the Potier Triangle.

In the synchronous machine, the effect of the field leakage flux in combination with the armature leakage flux gives rise to an equivalent leakage reactance 𝑋𝑝, known as Potier Reactance. It is given by,

For a cylindrical rotor synchronous machine, the Potier reactance (𝑋𝑝) is approximately equal to the armature leakage reactance (𝑋𝑎𝐿) while in a salient-pole machine, the 𝑋𝑝 may be as large as 3 times 𝑋𝑎𝐿.