What do you understand by a rigid body and its rotation and motion?

The rigid body is demonstrated as the idealization of a body that does not change its shape or does not deform. It can also be described as particles collection with the property where the distance between particles is unchanged at the time of course of motions of the body. All bodies get deformed when they are in motion (springer, 2019).

In the case of the rigid body there is no deformation is found and is determined as the constant distribution of mass. This can also be explained as when the distance between 2 provided points of the rigid body remains in the constant state in time interval even if an external force is exerted on that body (Schmelzbach et al. 2018).

Even if the rigid body has various mad molecules and atoms they will remain in the uniform motion state. If a rigid body is found in pure rotational motion then it will rotate around an axis that is fixed and perpendicular to a fixed plane.

What is the translational motion of the rigid body?

But here as the box is falling (down) freely then the distance between 2 constituent particles in the body is always fixed and the motion of each rigid body will remain the same to the motional of the entire body translational motion.

What is the rotational motion of a rigid body? 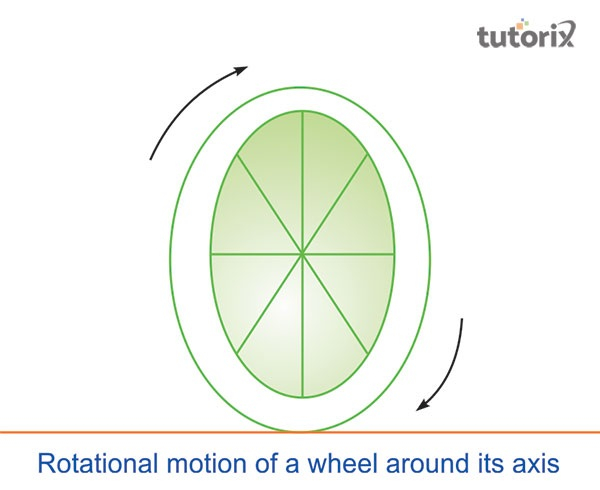 From the above figure, it can be seen the rotational motion of a wheel is passing around its axis through the centre. When this wheel is moving around the axis it passes through its centre normally and the entire rigid body and its constituent particles keep rotating along its axis (Kim et al. 2018). The wheel that traces circular path on the axis is determined to be in the rotational motion.

Q1. What are the translational motion and its types?

Q3. What are the differences between linear and non-rigid bodies?

Q4. What is axis of rotation?

The axis around which the body keeps rotating either in a circular path is called the axis of rotation. In the dynamics and kinematics of rotation of rigid body that takes place around an axis that is fixed is determined to be fully analogous to those of linear motion along one fixed direction and is in the rotational motion.