Explain the types of ETHERNET Cable.

There are various types of ETHERNET Cables which are as follows −

The first standard defined in IEEE 802.3 is 10 Base 5. It is a Thick Ethernet or Thicknet. It is a bus topology LAN with baseband signaling. The data speed is 10 Mbps, and the maximum allowed segment length is 500 meters. The bus's total length should not exceed 2500 meters, i.e., with a segment of 500 meters, each resulting in only five segments to be used. Each station should be separated from its neighbours by 2.5 meters, i.e., only 200 stations are permitted in maximum in each segment, totaling up to 1000 stations in all.

The second implementation-defined by IEEE 802.3 is 10 Base 2, also called Thin Ethernet, and cheaper net etc. It supports an inexpensive alternative to 10 Base 5 Ethernet with the same data rate, i.e., 10 Mbps. It uses a thin coaxial cable with smaller segments of 185 meter than 500 meters of thick net segments.

The 10 Base T is the most popular Ethernet standard defined in IEEE 802.3. It is also called Twisted Pair Ethernet. It is used in star topology LAN, which uses unshielded twisted pair (UTP) cable instead of coaxial cable. It supports a data rate of 10 Base and a maximum cable length of 100 meters. An intelligent-hub is used to connect the workstations in a star network format.

The cables and connectors used to connect the workstations in the 10 Base T network include the following:

The figure shows 10 Base T topologies with all of them. 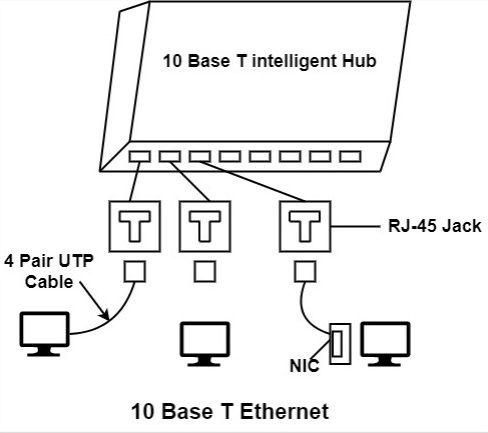 The 1 Base 5 Ethernet also is a star topology based LAN that uses a hub to connect all workstations in a star topology. It is also known as star LAN and is an AT & T product. Its data speed is meager, i.e., only 1 Mbps, and that is why it is the least used Ethernet. It allows a maximum cable length of 500 meters in each segment.

The figure shows a Base 5 Ethernet. 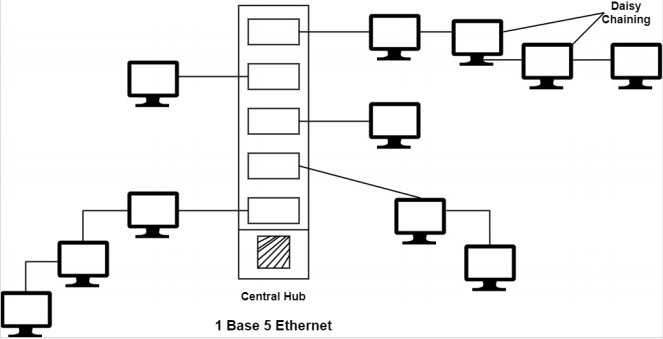 The 100 Base T Ethernet is the fifth, and last baseband specification initially added to IEEE802.3 standards. It is also known as Fast Ethernet. It operates at a data speed of 100 Mbps and uses twisted-pair cables (UTP) and a central hub or switch.

The main problem with hub Ethernets was that they mailed the data or frame transmitted to the hub for any host to all the other hosts connected to the hub. The figure shows an Ethernet using a hub with six hosts A1 to A6.

At any instant, host A1 transmitted a frame for host A4, sent to all hosts, i.e., A2 to A6 by the hub. Therefore, all the cables are busy instantly, one for the outgoing frame and the rest for incoming frames. So one transmission uses the total capacity of 10 Mbps because if one station is transmitting, no one else can transmit as the rest are receiving. 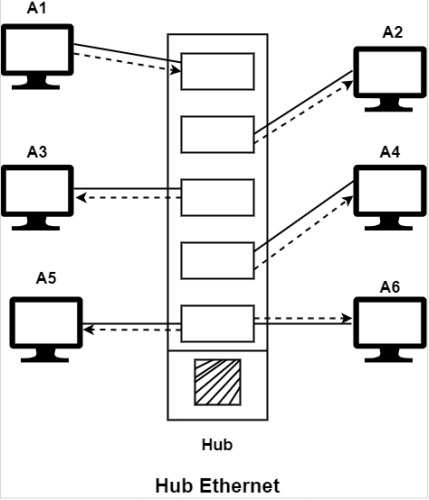 The gigabit Ethernet has a data rate of 1000 Mbps or 1 Gbps. The MAC layer access methods in it remained unchanged, and the collision domain was reduced. It uses optical fibres. The encoding method also changed in them. The 1000 Base SX and 1000 Base LX use optical fibers, while 1000 Base CX uses STP and 1000 Base T uses UTP.

A gigabit Ethernet is shown in the figure below.