Resources in SM are dynamically partitioned and assigned to threads to support their execution. As has been explained in the previous chapter, the number of resources in SM are limited, and the higher the demands of a thread, the lower the number of threads that can actually run parallel inside the SM. Execution resources of SM include registers, shared memory, thread block slots and thread slots.

This ability of CUDA to dynamically partition SM resources into thread blocks makes it the real deal. Fixed partitioning methods, in which each thread block receives a fixed number of execution resources regardless of its need leads to wasting of execution resources, which is not desired, as they are already at a premium. Dynamics partition has its own nuances. For example, suppose each thread block has 128 threads. This way, each SM will have 12 blocks. But we know that the current generation of CUDA devices support no more than 8 thread block slots per SM. Thus, out of 12, only 8 blocks will be allowed. This means that out of 1536 threads, only 1024 will be allocated to the SM. Thus, to fully utilize the available resources, we need to have at least 256 threads in each block.

In the matrix-multiplication example, consider that each SM has 16384 registers and each thread requires 10 registers. If we have 16x16 thread blocks, how many registers can run on each SM? The total number of registers needed per thread block = 256x10 = 2560 registers. This means that a maximum of 6 thread blocks (that need 15360 registers) can execute in a SM.

It is to be noted that by using just two registers per thread extra, the warp parallelism reduces by 1/6.This is known as performance cliff and refers to a situation in which increasing the resource usage per thread even slightly leads to a large reduction in performance. The CUDA occupancy calculator (a program from Nvidia) can calculate the occupancy of each SM.

Let us consider an example of matrix-matrix multiplication once again. Our aim is to reduce the number of accesses to global memory to increase arithmetic intensity of the kernel. Let d_N and d_M be of dimensions 4 x 4 and let each block be of dimensions 2 x 2. This implies that, each block is made up of 4 threads, and we require 4 blocks to compute all the elements of d_P.

The following table shows us the memory access pattern of block (0,0) in our previous kernel.

From the above figure, we see that both thread (0,0) and thread (1,0) access N1,0. Similarly, both thread (0,0) and thread (0,1) access element M0,0. In fact, each d_M and d_N element is accessed twice during the execution of block (0,0). Accessing the global memory twice for fetching the same data is inefficient. Is it possible to somehow make a thread collaborate with others so that they don’t access previously fetched elements? It was explained in the previous chapter that shared memory can be used for inter-thread communication.

It is an algorithm for matrix multiplication in which threads collaborate to reduce global memory traffic. Using this algorithm, multiple accesses to the global memory for fetching the same data is avoided. 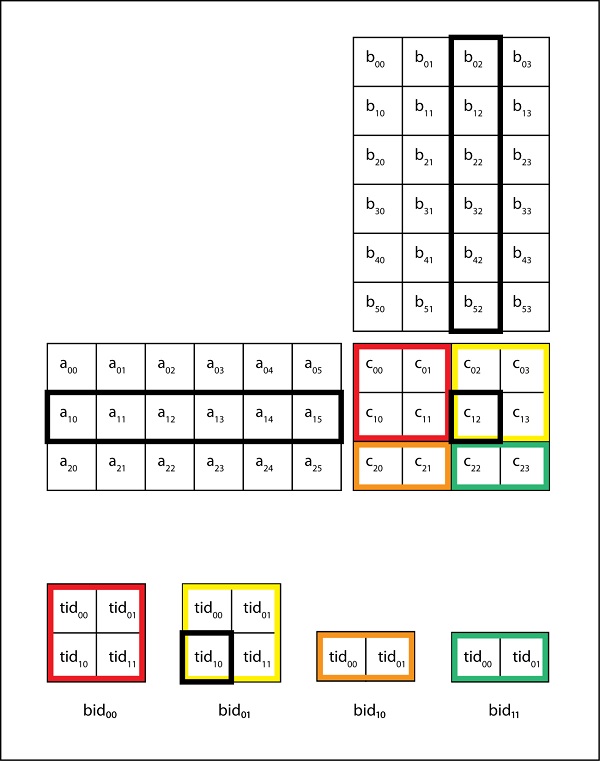