Apart from the device DRAM, CUDA supports several additional types of memory that can be used to increase the CGMA ratio for a kernel. We know that accessing the DRAM is slow and expensive. To overcome this problem, several low-capacity, high-bandwidth memories, both on-chip and off-chip are present on a CUDA GPU. If some data is used frequently, then CUDA caches it in one of the low-level memories. Thus, the processor does not need to access the DRAM every time. The following figure illustrates the memory architecture supported by CUDA and typically found on Nvidia cards − 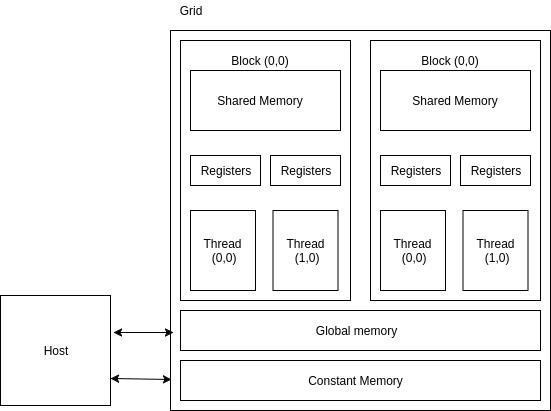 This helps in transferring data to/from per grid global and constant memories.

The global memory is a high-latency memory (the slowest in the figure). To increase the arithmetic intensity of our kernel, we want to reduce as many accesses to the global memory as possible. One thing to note about global memory is that there is no limitation on what threads may access it. All the threads of any block can access it. There are no restrictions, like there are in the case of shared memory or registers.

The constant memory can be written into and read by the host. It is used for storing data that will not change over the course of kernel execution. It supports short-latency, high-bandwidth, read-only access by the device when all threads simultaneously access the same location. There is a total of 64K constant memory on a CUDA capable device. The constant memory is cached. For all threads of a half warp, reading from the constant cache, as long as all threads read the same address, is no slower than reading from a register. However, if threads of the half-warp access different memory locations, the access time scales linearly with the number of different addresses read by all threads within the half-warp.

How does constant memory work?

For devices with CUDA capabilities 1.x, the following are the steps that are followed when a constant memory access is done by a warp −

The __constant__ keyword can be used to store a variable in constant memory. They are always declared as global variables.

Registers and shared-memory are on-chip memories. Variables that are stored in these memories are accessed at a very high speed in a highly parallel manner. A thread is allocated a set of registers, and it cannot access registers that are not parts of that set. A kernel generally stores frequently used variables that are private to each thread in registers. The cost of accessing variables from registers is less than that required to access variables from the global memory.

All threads of a block can access its shared memory. Shared memory can be used for inter-thread communication. Each block has its own shared-memory. Just like registers, shared memory is also on-chip, but they differ significantly in functionality and the respective access cost.

The following table summarizes the lifetime, scope and memory of different types of CUDA variables −

Constant variables are stored in the global memory (constant memory), but are cached for efficient access. They can be accessed in a highly-parallel manner at high-speeds. As their lifetime equals the lifetime of the application, and they are visible to all the threads, declaration of constant variables must be done outside any function.

Memory as a Bottleneck

Although shared memory and registers are high-speed memories with huge bandwidth, they are available in limited amounts in a CUDA device. A programmer should be careful not to overuse these limited resources. The limited amount of these resources also caps the number of threads that can actually execute in parallel in a SM for a given application. The more resources a thread requires, the less the number of threads that can simultaneously reside in the SM. It is simply because there is a dearth of resources.

Let us suppose that each SM can accommodate upto 1536 threads and has 16,384 registers. To accommodate 1536 threads, each thread can use no more than 16,384/1536 = 10 registers. If each threads requires 12 registers, the number of threads that can simultaneously reside in the SM is reduced. Such reduction is done per block. If each block contains 128 threads, the reduction of threads will be done by reducing 128 threads at a time.