In this chapter, we will understand in detail regarding the Robertson-Walker Metric.

Suppose a photon is emitted from a distant galaxy. The space is forward for photon in all directions. The expansion of the universe is in all the directions. Let us see how the scale factor changes with time in the following steps.

Step 1 − For a static universe, the scale factor is 1, i.e. the value of comoving distance is the distance between the objects. 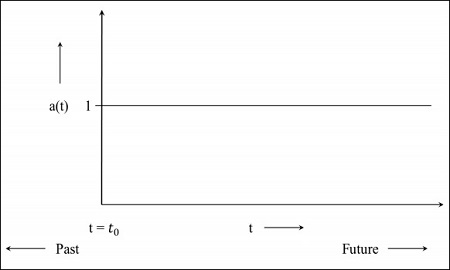 Step 2 − The following image is the graph of the universe that is still expanding but at a diminishing rate, which means the graph will start in the past. The t = 0 indicates that the universe started from that point. 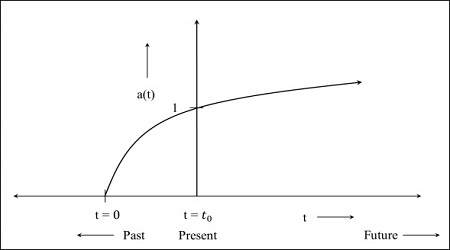 Step 3 − The following image is the graph for the universe which is expanding at a faster rate. 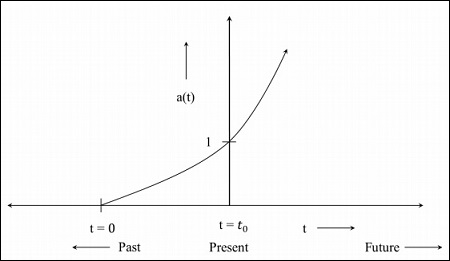 Step 4 − The following image is the graph for the universe that starts contracting from now. 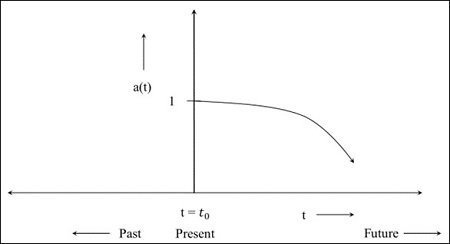 The Metric for flat (Euclidean: there is no parameter for curvature) expanding universe is given as −

For space–time, the line element that we obtained in the above equation is modified as −

For space – time, the time at which the photon is emitted and when it is detected is different. The proper distance is the instantaneous distance to objects which can change over time due to the expansion of the universe. It is the distance that the photon had travelled from different objects to get to us. It is related to the comoving distance as −

where $d_p$ is the proper distance and $d_c$ is the comoving distance, which is fixed.

Based on the above notion, let us analyze how cosmological red shift is interpreted in this scenario of $d_p = a(t) \times d_c$.

The factor by which the universe has grown is given by −

The factor by which wavelength has expanded is −

which is equal to the factor by which the universe has grown. The symbols have their usual meaning. Therefore,

We know that redshift (z) is −

Interpretation of Redshift in Cosmology

For cosmic microwave background (CMB), z = 1089, which means that the present universe has expanded by a factor of ∼1090. The metric for flat, Euclidean, expanding universe is given as −

We wish to write the metric in any curvature.

Robertson and Walker proved for any curvature universe (which is homogeneous and isotropic), the metric is given as −

This is generally known as the Robertson–Walker Metric and is true for any topology of space. Please note the extra factor in $dr^2$. Here 𝑘 is the curvature constant.

Geometry of the Universe

The Geometry of the Universe is explained with the help of the following Curvatures, which include −

Such spaces are called positively curved spaces. Also, the curvature is homogeneous and isotropic. In general, the angle at the vertices of the spherical triangle follows the relation −

where A is the area of the triangle and R is the radius of the sphere. The following image depicts a positively curved space. 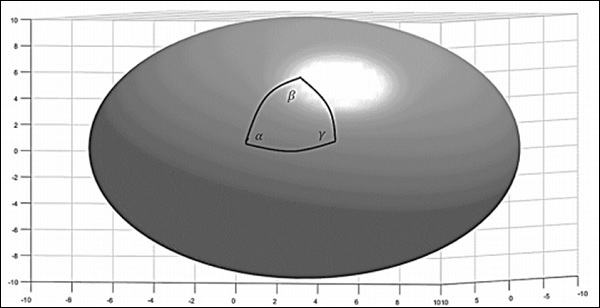 For a positive curvature, the parallel lines should meet. Consider the surface of the earth, which is a positively curved space. Take two starting points on the equator. The lines which cross the equator at right angles are known as the lines of longitude. Since these lines cross the equator at right angles, they can be referred to as parallel lines. Starting from the equator, they eventually intersect at the poles. This method was used by Carl Gauss and others to understand the topology of the earth.

Consider a negatively – curved space (a saddle shown in the following image), the sum of interior angles of the triangle is less than 180o, i.e. −

The angle at the vertices follows the relation − 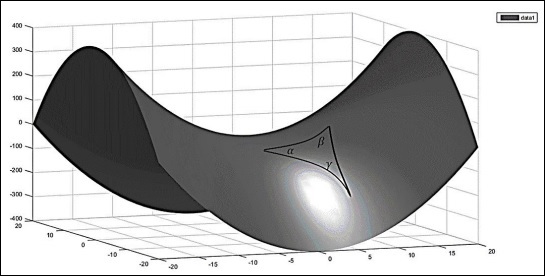 A plane surface has zero curvature. Now for a flat space, if a plane is taken and a triangle is constructed by joining three points with geodesic (straight lines), the interior sum of angles will be −

The following image is a flat 2-dimensional space. 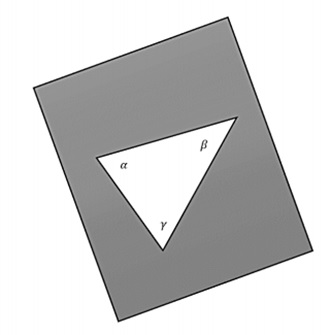 The curvature constant can assume any of the following three values.

Global Topology of the Universe

The universe has a certain topology, but locally it can have wrinkles. Depending on how the matter is distributed in the space, there are smaller variations in the curvature. Let us assume that there is a class of objects which have the same true size no matter where it is in the universe, which means they are like standard candles. They don’t have the same brightness, but they have the same size.

If the object is in the local universe and we measure the angular size, it is not affected by the curvature. If the same class of object is seen at a greater redshift, the angular size does not correlate with.

Where d is the size of the object and r is the distance to the object, i.e. if size is greater than the local size, it means the curvature is positive. The following image is a representation of the photon detected in a positively curved space.

It is to be noted that there is no real astrophysical object which is of standard size and morphology. Although a massive elliptical cD – galaxies were thought to fit the standard candles, but they were also found to be evolving with time.

In this section, we will discuss how to find the distance to a galaxy by taking into consideration the following image. 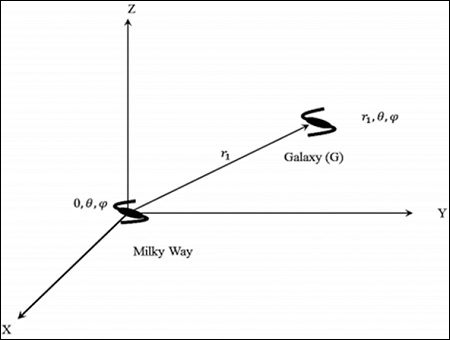 Consider the Milky Way at (r, θ,) in a cosmological rest frame. One can take 𝑟 = 0; (0, θ,ϕ), i.e. the centre of the universe by invoking the assumption of homogeneity.

Consider a galaxy ‘G’ at (r1, θ,). The distance (proper) is the shortest radial distance travelled by a photon. From the symmetry of space – time, the null geodesic from r = 0 to r = r1, has a constant direction in space. In its radial propagation, the angular co-ordinates do not change. If angular co–ordinates get changed, then it is not the shortest path. That is the reason why the curvature term is present in dr2.