In this chapter, we will discuss the Solutions to Friedmann Equations relating to the Radiation Dominated Universe. In the beginning, we compare the energy density of matter to that of radiation. This will enable us to see if our universe is matter dominated or radiation dominated.

Radiation prevalent in the present universe can be attributed very little to the stellar sources, but it is mainly due to the remnant CMB (Cosmic Microwave Background).

The energy density of the radiation, $\epsilon_{\gamma,0}$, can be expressed as follows −

Substituting the results, we have,

Thus, from the above calculation, we see that we live in a matter-dominated universe. This can be supported by the fact that the CMB is very cold. As we look back in time, we would have the CMB temperature getting hotter, and will be able to conclude that there might have been an epoch where the universe was dominated by radiation.

Variation of Density and Scale Factor

The fluid equation shows us that −

If we consider a dusty universe, we would have P = 0. Setting aside the previous results, we consider the universe as dominated by radiation.

On further simplification, we have,

The above result shows an inverse 4th power variation of a with $\rho$.

This can be physically interpreted as $a^{-3}$ coming in from the variation in volume as it increases. The remaining $a^{-1}$ can be treated as the energy lost by the photon due to the expansion of space in the universe (Cosmological redshift 1 + z = a-1).

The following image shows the variation of matter and radiation density with time. 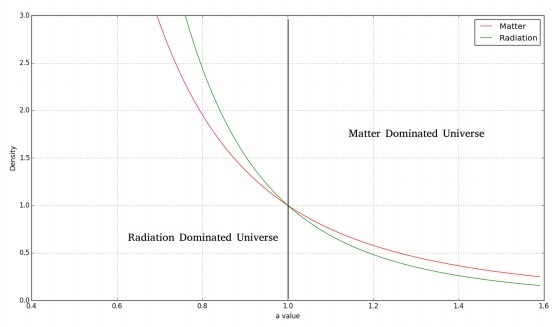 For a flat, radiation dominated universe, we would have the Friedmann equation as follows −

On simplification and applying the solution to the differential equation, we have −

From the above equation, we see that the rate of increase of scale factor is smaller than that of the dusty universe.