When the orbital plane is at an angle with respect to the plane of sky (not perpendicular), we have the following situation − 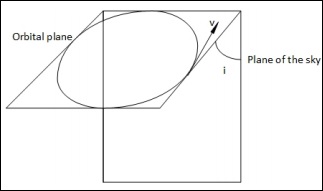 In this case, when they were perpendicular, we had two points at which we could measure the true velocity. But here, that is not possible. At all points, we can measure only a component of the true velocity, v.

where θ is the phase of the orbit which is a time-dependent quantity. The inclination angle i on the other hand, is time-independent. Hence,

The observed radial velocity curve will be of the following form − 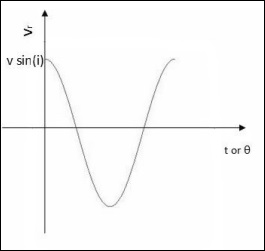 When the orbital plane is perpendicular to the sky −

where mp, P, G, M∗ are mass of the planet, orbital period, universal gravitational constant and mass of the star respectively. But in this case, we should modify it as follows −

But, finding the value of i is a difficult task. We can impose certain constraints on the value of i using transit method. The passage of the planet between the star and the Earth is called a transit. We can obtain the light curve by observing a transit and a significant dip in observed flux of a light curve implies that i is close to 90 degrees. If such conditions are not satisfied, we cannot have any idea on the value of i. Then the value of mp that we find can serve as a lower limit for the mass of the planet, since it is actually mp sin(i) and sin(i) ≤ 1.