When we look at the refined, corrected all sky CMB map, there is a lot of foreground contamination, which is a kind of anisotropy in these maps. We can see that these foreground emissions are from the milky way galaxy. The intensity of CMB is high along the plane of galactic plane and reduces in intensity as we move away. In these, we can observe secondary anisotropies, which are synchrotron emissions from the galaxy. These emissions make up the foreground contamination. To look at the CMB emission from the sky, we need to subtract these foreground emissions.

The following image shows the CMB with foreground emissions. 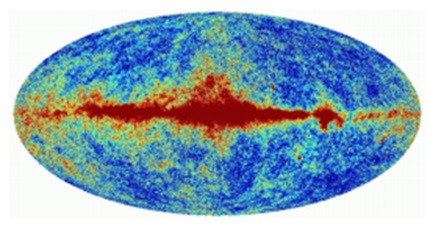 There is another kind of anisotropy, which was found in the CMB all sky map, it is called as Dipole Anisotropy. It is not associated with the early universe. This can be represented using spherical harmonic functions. If there is a pattern on spherical surface and we want to map it using mathematical functions, we can do so using trigonometric functions. So, when we map, it can be a monopole – same at every direction, or a dipole – flips properties when rotated by 180 degrees. Similarly, we have quadrupole and so on. For a complex pattern, it can be expressed as the sum of these monopole, dipole, quadrupole, etc.

The CMB is modelled in such a manner that one of the major sources of anisotropy in the all sky map is this dipole anisotropy, but it is not primordial modelling of CMB. This can be seen in the image below. 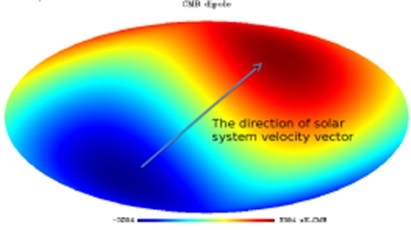 The dipole direction we get to see is not any random direction. Dipole anisotropy has a direction. We see the CMB intensity along a specific direction. This direction is due to the solar system velocity vector. The velocity of earth can be represented with respect to sun or centre of galaxy. The direction in which earth is moving, we observe a Blueshift and Redshift and the dipole lies along this direction.

We can say, the earth is moving in some specific direction with respect to sun/galactic centre/ CMB in the sky at a given instant. Then, if we look at any angle and measure the temperature for CMB, it would be different. This is because, we are measuring photons which are either Blueshifted or Redshifted and depends on the line of sight of photons in the sky.