As the name suggests, this type of learning is done without the supervision of a teacher. This learning process is independent. During the training of ANN under unsupervised learning, the input vectors of similar type are combined to form clusters. When a new input pattern is applied, then the neural network gives an output response indicating the class to which input pattern belongs. In this, there would be no feedback from the environment as to what should be the desired output and whether it is correct or incorrect. Hence, in this type of learning the network itself must discover the patterns, features from the input data and the relation for the input data over the output.

These kinds of networks are based on the competitive learning rule and will use the strategy where it chooses the neuron with the greatest total inputs as a winner. The connections between the output neurons show the competition between them and one of them would be ‘ON’ which means it would be the winner and others would be ‘OFF’.

Following are some of the networks based on this simple concept using unsupervised learning.

In most of the neural networks using unsupervised learning, it is essential to compute the distance and perform comparisons. This kind of network is Hamming network, where for every given input vectors, it would be clustered into different groups. Following are some important features of Hamming Networks −

This is also a fixed weight network, which serves as a subnet for selecting the node having the highest input. All the nodes are fully interconnected and there exists symmetrical weights in all these weighted interconnections. 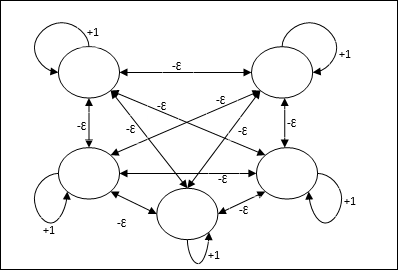 It uses the mechanism which is an iterative process and each node receives inhibitory inputs from all other nodes through connections. The single node whose value is maximum would be active or winner and the activations of all other nodes would be inactive. Max Net uses identity activation function with $$f(x)\:=\:\begin{cases}x & if\:x > 0\\0 & if\:x \leq 0\end{cases}$$

The task of this net is accomplished by the self-excitation weight of +1 and mutual inhibition magnitude, which is set like [0 < ɛ < $\frac{1}{m}$] where “m” is the total number of the nodes.

It is concerned with unsupervised training in which the output nodes try to compete with each other to represent the input pattern. To understand this learning rule we will have to understand competitive net which is explained as follows − 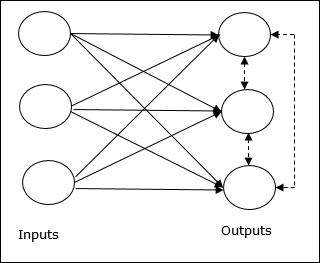 As said earlier, there would be competition among the output nodes so the main concept is - during training, the output unit that has the highest activation to a given input pattern, will be declared the winner. This rule is also called Winner-takes-all because only the winning neuron is updated and the rest of the neurons are left unchanged.

K-means is one of the most popular clustering algorithm in which we use the concept of partition procedure. We start with an initial partition and repeatedly move patterns from one cluster to another, until we get a satisfactory result.

Step 1 − Select k points as the initial centroids. Initialize k prototypes (w1,…,wk), for example we can identifying them with randomly chosen input vectors −

Each cluster Cj is associated with prototype wj.

Step 2 − Repeat step 3-5 until E no longer decreases, or the cluster membership no longer changes.

Step 3 − For each input vector ip where p ∈ {1,…,n}, put ip in the cluster Cj* with the nearest prototype wj* having the following relation

It is a hierarchical network, which comprises many layers and there is a pattern of connectivity locally in those layers.

As we have seen in the above diagram, neocognitron is divided into different connected layers and each layer has two cells. Explanation of these cells is as follows −

S-Cell − It is called a simple cell, which is trained to respond to a particular pattern or a group of patterns.

C-Cell − It is called a complex cell, which combines the output from S-cell and simultaneously lessens the number of units in each array. In another sense, C-cell displaces the result of S-cell.

Training of neocognitron is found to be progressed layer by layer. The weights from the input layer to the first layer are trained and frozen. Then, the weights from the first layer to the second layer are trained, and so on. The internal calculations between S-cell and Ccell depend upon the weights coming from the previous layers. Hence, we can say that the training algorithm depends upon the calculations on S-cell and C-cell.

The S-cell possesses the excitatory signal received from the previous layer and possesses inhibitory signals obtained within the same layer.

Here, ti is the fixed weight and ci is the output from C-cell.

The scaled input of S-cell can be calculated as follows −

wi is the weight adjusted from C-cell to S-cell.

w0 is the weight adjustable between the input and S-cell.

v is the excitatory input from C-cell.

The activation of the output signal is,

The net input of C-layer is

The final output is as follows −

Here ‘a’ is the parameter that depends on the performance of the network.