These are stochastic learning processes having recurrent structure and are the basis of the early optimization techniques used in ANN. Boltzmann Machine was invented by Geoffrey Hinton and Terry Sejnowski in 1985. More clarity can be observed in the words of Hinton on Boltzmann Machine.

“A surprising feature of this network is that it uses only locally available information. The change of weight depends only on the behavior of the two units it connects, even though the change optimizes a global measure” - Ackley, Hinton 1985.

Some important points about Boltzmann Machine −

The following diagram shows the architecture of Boltzmann machine. It is clear from the diagram, that it is a two-dimensional array of units. Here, weights on interconnections between units are –p where p > 0. The weights of self-connections are given by b where b > 0. 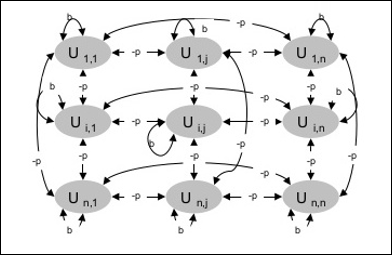 As we know that Boltzmann machines have fixed weights, hence there will be no training algorithm as we do not need to update the weights in the network. However, to test the network we have to set the weights as well as to find the consensus function (CF).

Boltzmann machine has a set of units Ui and Uj and has bi-directional connections on them.

Now, when the state changes from either 1 to 0 or from 0 to 1, then the change in consensus can be given by the following relation −

Here ui is the current state of Ui.

Generally, unit Ui does not change its state, but if it does then the information would be residing local to the unit. With that change, there would also be an increase in the consensus of the network.

Here, T is the controlling parameter. It will decrease as CF reaches the maximum value.

Step 1 − Initialize the following to start the training −

Step 2 − Continue steps 3-8, when the stopping condition is not true.

Step 4 − Assume that one of the state has changed the weight and choose the integer I, J as random values between 1 and n.

Step 5 − Calculate the change in consensus as follows −

Step 7 − Accept or reject this change as follows −

Here, R is the random number between 0 and 1.