Processing of ANN depends upon the following three building blocks −

In this chapter, we will discuss in detail about these three building blocks of ANN

A network topology is the arrangement of a network along with its nodes and connecting lines. According to the topology, ANN can be classified as the following kinds −

It is a non-recurrent network having processing units/nodes in layers and all the nodes in a layer are connected with the nodes of the previous layers. The connection has different weights upon them. There is no feedback loop means the signal can only flow in one direction, from input to output. It may be divided into the following two types − 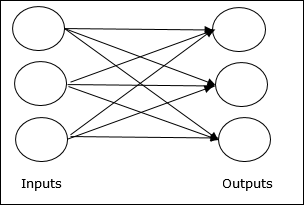 As the name suggests, a feedback network has feedback paths, which means the signal can flow in both directions using loops. This makes it a non-linear dynamic system, which changes continuously until it reaches a state of equilibrium. It may be divided into the following types − 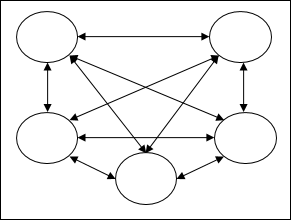 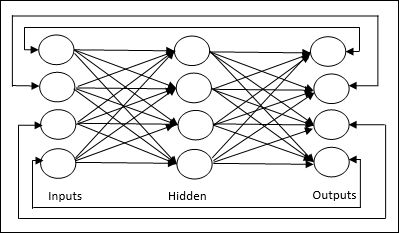 Adjustments of Weights or Learning

Learning, in artificial neural network, is the method of modifying the weights of connections between the neurons of a specified network. Learning in ANN can be classified into three categories namely supervised learning, unsupervised learning, and reinforcement learning.

As the name suggests, this type of learning is done under the supervision of a teacher. This learning process is dependent.

As the name suggests, this type of learning is done without the supervision of a teacher. This learning process is independent.

During the training of ANN under unsupervised learning, the input vectors of similar type are combined to form clusters. When a new input pattern is applied, then the neural network gives an output response indicating the class to which the input pattern belongs.

There is no feedback from the environment as to what should be the desired output and if it is correct or incorrect. Hence, in this type of learning, the network itself must discover the patterns and features from the input data, and the relation for the input data over the output.

As the name suggests, this type of learning is used to reinforce or strengthen the network over some critic information. This learning process is similar to supervised learning, however we might have very less information.

During the training of network under reinforcement learning, the network receives some feedback from the environment. This makes it somewhat similar to supervised learning. However, the feedback obtained here is evaluative not instructive, which means there is no teacher as in supervised learning. After receiving the feedback, the network performs adjustments of the weights to get better critic information in future.

It is also called the identity function as it performs no input editing. It can be defined as −

It is of two type as follows −