Basic pay information of an employee is stored in basic pay Infotype (0008). An employee’s payroll history can be checked using Infotype history.

In case an employee leaves an organization, the basic payroll data for that employee remains in the system to ensure accuracy of any retroactive account runs to be performed. A basic pay Infotype 0008 can be processed itself with a personnel action. To create a new record you need to enter payment type on maintain HR master data screen.

The standard system contains the following payment types as subtypes −

A pay scale reclassification involves moving an employee to a new pay scale group and to a different pay scale level. In this case, an employee receives the remuneration for the new pay level assignment. 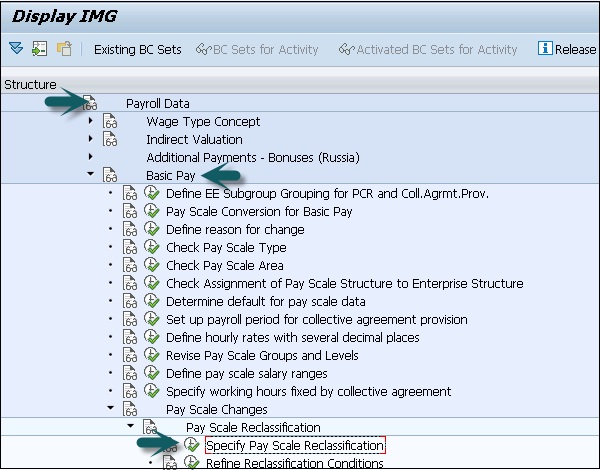 A pay scale Structure consists of the following components −

A pay scale area is defined in Customizing Personnel administration and is identified by four character alphanumeric identifier per country. You also define pay scale groups and levels for each pay scale type and employee subgroup grouping in a pay scale area.

The default values are suggested for payscale type and groups and linked to personnel subarea when you create a record in basic pay Infotype (0008).

A Pay scale type is used to define the area of economic activity for which an agreement is valid. The geographical area in which it is valid is applied to the full company.