You can perform business logic and script logic on the data in BPC. There are various calculations that can be performed.

Business Rules − These are monetary functions which are used to post common accounting tasks in Business Planning and Consolidation model.

Script Logic − This includes the formulas which are used to perform different calculations on the members, dimensions, and data in BPC system.

How to Define Dimension Logic?

You should be familiar with Multi Dimension Expression language to create complex Dimension formulas. The list of supported MDX functions is available from functional module BAPI_MDPROVIDER_GET_FUNCTIONS.

Prerequisites − To use a formula in dimension, you should add a property called Formula to member sheets using manage dimension task option.

You should also define the length of field and it should be more than 60 characters. Higher field lengths are preferred as any length greater than 60 is stored as string in SAP NetWeaver.

If you want to use Dimension formula in AppSet then you should maintain a special dimension member of type R. This member is called as Local Currency (LC).

Standard Arithmetic functions has to be used in dimension formula - addition (+), subtraction (−), multiplication (*), Division (/) - these are used in SAP NetWeaver.

Logic scripts allow you to automate the calculations in BPC for the financial statements. 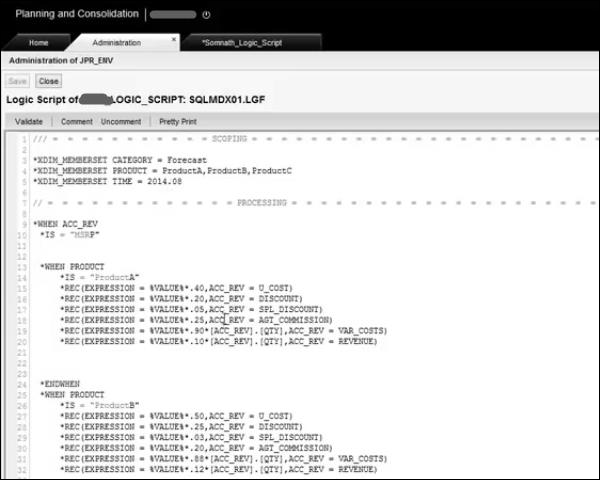 You can define business rules for the following activities −

To manage business rules in BPC system − Go to Administration as shown in the following screenshot. Go to Rules → Expand → Business Rules. 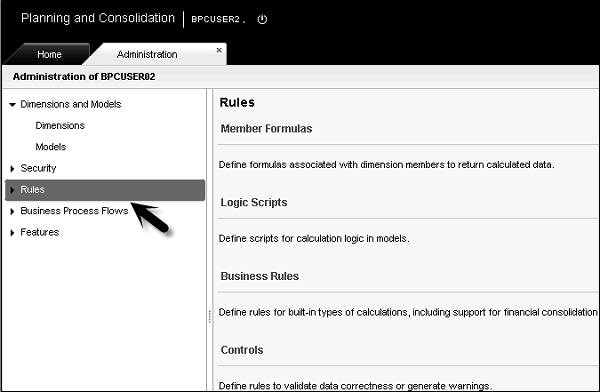 With help of script logic, you can write your own logic in SQL or MDX language. There are various MDX functions that can be used in dimension formulas. Some of the common MDX functions are −

There are other MDX functions that can be used in dimension formulas.

Standard Arithmetic functions have to be used in dimension formula - addition (+), subtraction (−), multiplication (*), Division (/) - these are used in SAP NetWeaver.

This includes movement of calculation dimension formulas from one time period to another.

Following are the exceptions to MDX syntax with BPC −

All the calculations performed in Excel worksheet is known as Worksheet logic. Worksheet logic includes all the functions that are available in an Excel spreadsheet and functions provided in BPC.