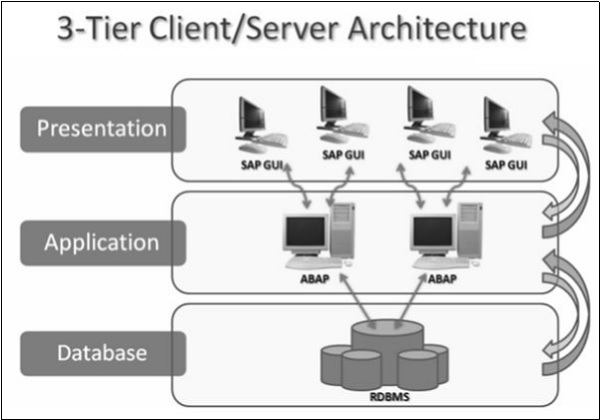 The Presentation layer consists of any input device that can be used to control SAP system. This could be a web browser, a mobile device and so on. All the central processing takes place in Application server. The Application server is not just one system in itself, but it can be multiple instances of the processing system. The server communicates with the Database layer that is usually kept on a separate server, mainly for performance reasons and also for security. Communication happens between each layer of the system, from the Presentation layer to the Database and then back up the chain.

ABAP programs reside inside the SAP database. They execute under the control of the runtime system that is a part of the SAP kernel. The run-time system processes all ABAP statements, controlling the flow logic and responding to user events.

So, unlike C++ and Java, ABAP programs are not stored in separate external files. Inside the database, ABAP code exists in two forms −

The run-time system can be considered as a virtual machine, just similar to Java virtual machine. A key component of the ABAP run-time system is the database interface that turns database independent statements (Open SQL) into the statements understood by the underlying database (Native SQL). SAP can work with a wide variety of databases and the same ABAP program can run on all of those.