Ajax stands for Asynchronous JavaScript and XML. Ajax is not a single technology; it is a suite of several technologies. Ajax incorporates the following −

Ajax enables you to retrieve data for a web page without having to refresh the contents of the entire page. In the basic web architecture, the user clicks a link or submits a form. The form is submitted to the server, which then sends back a response. The response is then displayed for the user on a new page.

When you interact with an Ajax-powered web page, it loads an Ajax engine in the background. The engine is written in JavaScript and its responsibility is to both communicate with the web server and display the results to the user. When you submit data using an Ajax-powered form, the server returns an HTML fragment that contains the server's response and displays only the data that is new or changed as opposed to refreshing the entire page.

Rails has a simple, consistent model for how it implements Ajax operations. Once the browser has rendered and displayed the initial web page, different user actions cause it to display a new web page (like any traditional web application) or trigger an Ajax operation −

These steps are the simplest way to use Ajax in a Rails application, but with a little extra work, you can have the server return any kind of data in response to an Ajax request, and you can create custom JavaScript in the browser to perform more involved interactions.

In this example, we will provide, list, show and create operations on ponies table. If you did not understand the scaffold technology then we would suggest you to go through the previous chapters first and then continue with AJAX on Rails.

Above command generates the scaffold with name and profession column. We need to migrate the data base as follows command

Now open the web browser and call a url as http://localhost:3000/ponies/new, The output will be as follows

Create a file, destroy.js.erb, put it next to your other .erb files (under app/views/ponies). It should look like this − 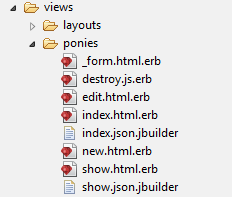 Now enter the code as shown below in destroy.js.erb

Now Open your controller file which is placed at app/controllers/ponies_controller.rb and add the following code in destroy method as shown below −

At finally controller page is as shown image.

Now run an application, Output called from http://localhost:3000/ponies/new, it will looks like as following image

Press on create pony button, it will generate the result as follows

Now click on back button, it will show all pony created information as shown image

Till now, we are working on scaffold, now click on destroy button, it will call a pop-up as shown below image, the pop-up works based on Ajax.

If Click on ok button, it will delete the record from pony. Here I have clicked ok button. Final output will be as follows − 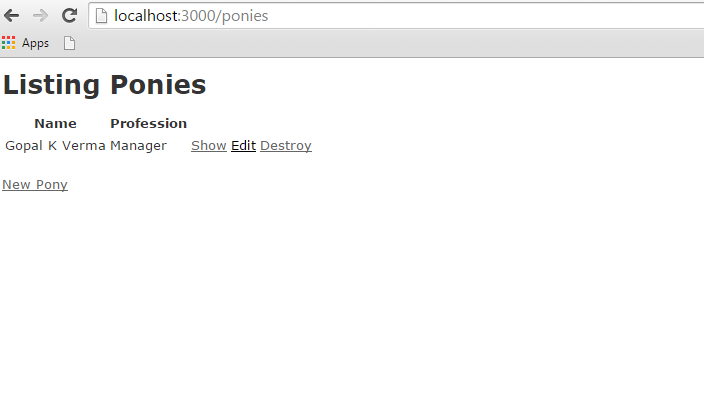