The acronym TRIAC stands for Triode for Alternating Current. A TRIAC is a semiconductor device with three terminals that control the flow of current, thus the name Triac. Unlike SCR, TRIAC is bi-directional while SCR is bi-directional. It is ideal for operation utilizing AC power for switching purposes since it can control current flow for both halves in an alternating current cycle. This explained clearly in the diagram below.

The circuit diagram for a TRIAC is shown below. It resembles two thyristors placed back to back. 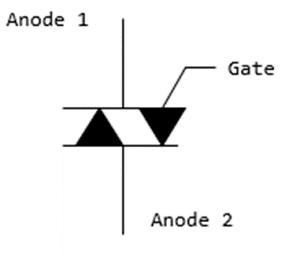 The TRIAC Structure is regarded as a DIAC having an extra gate contact incorporated to ensure device control. Similar to other power devices, the TRIAC is manufactured from silicon. Consequently, the process of fabricating the silicon leads to the production of cheaper devices. As indicated below, the TRIAC has a six areas namely; four N-type regions and two P-type regions. 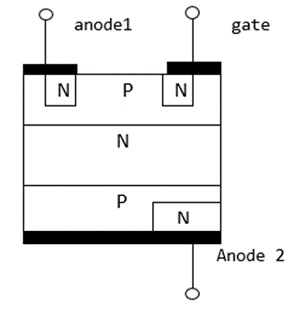 The operation of the TRIAC is based on the thyristor. It facilitates the switching function in AC electrical components and systems. They are widely used in light dimmers because they allow both halves of the AC cycle to be utilized. As a result, this makes them more efficient in power usage. As much as it is possible to use thyristors to function as TRIAC, it is not cost efficient for operations that require low power. It is possible to view a TRIAC in terms of two thyristors.

TRIACs are normally used in applications that do not require very high power because they exhibit non-symmetrical switching in their operation. This is disadvantageous for applications utilizing high power as it causes electromagnetic interference. As a result, TRIACs are used in motor controls, light residential light dimmers and small electric fans to control speed.