The analysis of most converters is usually simplified under ideal conditions (no source impedance). However, this assumption is not justified since source impedance is normally inductive with a negligible resistive element.

Source inductance effect on a converter is analyzed in the following two ways.

Assuming that the converter operates in conduction mode and the ripple from the load current is negligible, the open circuit voltage becomes equal to average DC output at a firing angle of α.The diagram below shows a fully controlled converter with source in single phase. The thyristors T3 and T4 are assumed to be in conduction mode when t = 0. On the other hand, T1 and T2 fire when ωt = α

When there is no source inductance, commutation will occur at T3 and T4. Immediately thyristors T1 and T2 are switched ON. This will lead the input polarity to change instantaneously. In the presence of source inductance, change of polarity and commutation does not occur instantaneously. Thus, T3 and T4 do not commutate as soon as T1 and T2 are switched ON.

At some interval, all the four thyristors will be conducting. This conducting interval is called the overlap interval (μ).

The overlap during commutation reduces the DC output voltage and the angle of extinction γ resulting in failed commutation when αis close to 180°. This is shown by the waveform below. 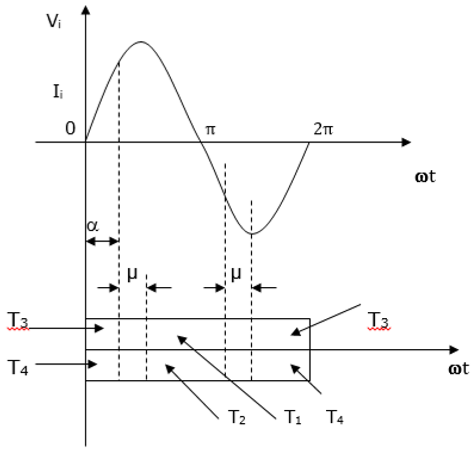