In OBIEE 10g, most of OBIEE administration tasks were mostly performed either through the Administration tool, the web-based Presentation Server administration screen, or through editing files in the filesystem. There were around 700 or so configuration options spread over multiple tools and configuration files, with some options like users and groups were embedded in unrelated repositories (the RPD).

In OBIEE 11g, all administration and configuration tasks are moved into Fusion Middleware Control also called as Enterprise Manager.

Administration tool that was present in OBIEE 10g is also present in 11g and is used to maintain the semantic model used by the BI Server. It has few enhancements in terms of dimension handling and new data sources. A major change is around security - when you open the Security Manager dialog −

Users and Application Roles are now defined in the WebLogic Server admin console. You use the Security Manager to define additional links through to other LDAP servers, register custom authenticators and set up filters, etc. In the above screenshot, the users shown in the users list are those that are held in WebLogic Server’s JPS (Java Platform Security) service, and there are no longer any users and groups in the RPD itself.

In Application Roles tab, you can see a list default application roles - BISystem, BIAdministrator, BIAuthor and BIConsumer - which are used to grant access to Presentation Server functionality.

Create a User in OBIEE

To create a new user, log on to the WebLogic Server admin console → Go to Security Realms from the Fusion Middleware Control menu → Select myrealm → Select Users and Groups. Click on Users tab, it will show you a list of existing users.

Click the New. → New user dialog box opens up → enter the user’s details. You can also use the Groups tab to define a group for the user, or assign the user to an existing group.

Following are the key file locations In OBIEE 11g −

Go to Overview. You can also stop, start and restart all of the system components like BI Server, Presentation Server etc. via OPMN. 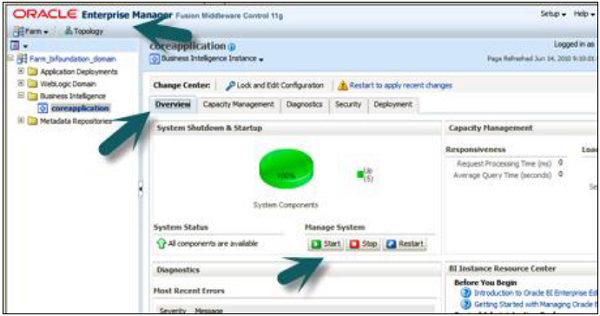 You can click the Capacity Management, Diagnostics, Security or Deployment tabs to perform further maintenance.

We have the following four options available for capacity management −

Diagnostics − Log Messages show you view of all server errors and warnings. Log Configuration allows you to limit the size of logs and information gets included in them.

Security − It is used for enabling SSO and selecting the SSO provider.

Deployment − Presentation allows you to set dashboard defaults, section headings, etc. Scheduler is used to set the connection details for the scheduler schema. Marketing is for configuring the Siebel Marketing Content Server connection. Mail option is used for setting up the mail server to deliver for email alerts. Repository is used to upload new RPDs for use by the BI Server.